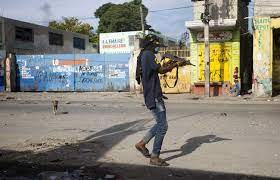 (AP) — Gangs in Haiti have long been financed by powerful politicians and their allies — and many feel they may be losing control of the increasingly powerful armed groups who have driven thousands of people from their homes as they battle over territory, kill civilians and raid warehouses of food.

The escalation in gang violence threatens to complicate — and be aggravated by — political efforts to recover from last week’s brazen slaying of President Jovenel Moïse. Haiti’s government is in disarray; no parliament, no president, a dispute over who is prime minister, a weak police force. But the gangs seem more organized and powerful than ever.

While the violence has been centred in the capital of Port-au-Prince, it has affected life across Haiti, paralyzing the fragile economy, shuttering schools, overwhelming police and disrupting efforts to fight the COVID-19 pandemic.

“The country is transformed into a vast desert where wild animals engulf us,” said the Haitian Conference of the Religious in a recent statement decrying the spike in violent crime. “We are refugees and exiles in our own country.”

Gangs recently have stolen tens of thousands of bags of sugar, rice and flour as well as ransacking and burning homes in the capital. That has driven thousands of people to seek shelter at churches, outdoor fields and a large gymnasium, where the government and international donors struggle to feed them and find long-term housing.

Those included dozens of disabled people who were forced to flee last month when gangs set fire to the encampment where they settled after being injured in the catastrophic 2010 earthquake.

“I was running for my life in the camp on these crutches,” said 44-year-old Obas Woylky, who lost a leg in the quake. “Bullets were flying from different directions. … All I was able to see was fire in the homes.”

He was among more than 350 people crammed into a school converted into a makeshift shelter where hardly anyone wore face masks against disease.

A cigarette dangled from the mouth of an older woman who washed clothes in a large bowl while a group of children took turns flicking a single blue marble. Nearby, a teenage girl crouched next to an elderly blind man sitting on the concrete floor and lifted a small bag of water to his mouth.

Experts say the violence is the worst they’ve seen since in roughly two decades — since before the creation of a second UN peacekeeping mission in 2004.

Programmes aimed at reducing gang activity and an influx of aid following the earthquake helped quell some of the problem, but once that money dried up and aid programmes shut down, gangs turned to kidnappings and extortion from businesses and neighbourhoods they control.

Gangs are in part funded by powerful politicians, a practice recently denounced even by one of its reputed beneficiaries — Jimmy Cherizier, a former police officer, who heads a gang coalition known as G9 Family and Allies.

He complained that the country is being held “hostage” by people he did not identify: “They reign supreme everywhere, distribute weapons to the populous quarters, playing the division card to establish their domination.”

Cherizier known as “Barbecue,” has been linked to several massacres and his coalition is believed to be allied with Moïse’s right-wing party. He criticised those he called “bourgeois” and “exploiters,” adding: “We will use our weapons against them in favour of the Haitian people. … We’re ready for war!”

G9 is one of at least 30 gangs that authorities believe control nearly half of Port-au-Prince. Their names range from “5 Seconds” — for how long it allegedly takes them to commit a crime — to “400 Mawozo” — which roughly translated means 400 lame men.

The epicentre of the recent gang violence is Martissant, a community in southern Port-au-Prince, whose main road connects the capital to southern Haiti. Drivers’ fear of caught in a crossfire or worse has almost paralyzed commercial connections between the two regions, driving up prices, delaying the transportation of food and fuel and forcing international organizations to cancel programmes, including the distribution of cash to more than 30,000 people, according to a July 1 report by the UN’s Office for the Coordination of Humanitarian Affairs.

“Newly displaced people seek refuge in shelters every day,” it said, adding that hygiene there was “appalling.” Authorities worry about a spike in COVID-19 cases in a country that has yet to give a single vaccine.

“Escalating violence on an almost daily basis is expected to last for some time,” the agency said in a report.

The overall economy doesn’t help. The UN said the cost of a basic food basket rose by 13 per cent in May compared with February, and that foreign direct investment fell by more than 70 per cent from 2018 to 2020, dropping from US$105 million to US$30 million. That translates into fewer jobs and increased poverty in a country where 60 per cent of the population makes less than US$2 a day and 25 per cent less than US$1 a day.

Many also worry that the gangs could derail elections scheduled for September and November — a contest crucial to restoring functional legislative and executive branches now largely moribund in the wake of Moise’s slaying.

But Haiti’s elections minister, Mathias Pierre, said Saturday that those backing the gangs may want to disrupt the elections. Such periods commonly see an upsurge in violence as groups try to use fear to nullify rivals’ advantages.

He said that wouldn’t work this time, noting that countries have held elections even during wars. “We need to organize elections. …They need to back off.”

Haiti’s Office of the Protection of Citizens, a sort of ombudsman agency, has urged the international community to help Haiti’s National Police, which it said was “unable to respond effectively to the gangsterization of the country.”

Pierre said that lack of resources and weakness of Haiti’s police led the government to ask the United States and United Nations to send troops to help maintain order following Moise’s killing: “We have a responsibility to avoid chaos.

Officials say they have been trying to boost the budget and manpower of a police force that now has about 9,000 operational officers for a country of more than 11 million people. Experts say it needs at least 30,000 officers to maintain control.

The government also is trying to figure out where to put those who have fled their homes due to violence, such as 43-year-old Marjorie Benoit, her husband and their three children.

Benoit, who lost an arm in the earthquake, said they fled as gunfire crackled around their neighbourhood. She now also has lost her home and all their belongings.

“We have been uprooted,” she said, “and we don’t know where to start.”