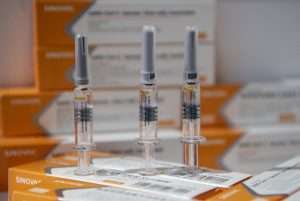 “The agreements, which come at a time when the Delta variant is posing a rising risk to health systems, will begin to make 110 million doses immediately available to participants of the Covax facility, with options for additional doses,” said the vaccine alliance Gavi, which is one of the facility’s main backers.

Gavi chief Seth Berkley hailed the agreements ushering two more vaccines into the Covax portfolio, which now has 11 vaccines and vaccine candidates at its disposal, including those made by AstraZeneca, Johnson&Johnson, Moderna, and Pfizer.

“Thanks to this deal, and because these vaccines have already received WHO Emergency Use Listing, we can move to start supplying doses to countries immediately,” he said in a statement.

Covax, which is also backed by the World Health Organization and the Coalition for Epidemic Preparedness Innovations (CEPI), was set up to ensure equitable distribution of COVID vaccines, particularly to low-income countries.

But it has struggled to get hold of enough donation-funded doses for poorer nations.

As of July 12, Covax had distributed over 102 million doses to 135 countries — far fewer than the goal stated at the start of the year.

WHO chief Tedros Adhanom Ghebreyesus has slammed “vaccine nationalism” in which a handful of countries have horded the jabs, leading to “shocking inequity” in global access to them.

While 70 per cent of the population is vaccinated in some developed countries, the figure is less than 1.0 per cent for low-income countries, according to the UN.

In total, some 170 million Sinopharm doses and a total of 380 million Sinovac doses could potentially be made available by mid-2022, the statement said.

The vaccine doses will be made available to both poorer countries, who receive donation-funded doses, and paying Covax participant.

Gavi said Monday that Covax now expects to be able to distribute two billion doses by early 2022, including 1.8 billion to the 92 poorest countries relying on the facility for their COVID vaccines.