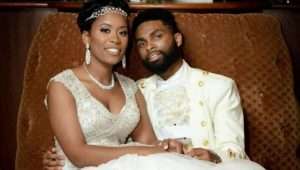 (JAMAICA OBSERVER)  – Police investigators in Teaneck, New Jersey in the United States are yet to identify a cause for Thursday’s devastating house fire that claimed the lives of a married couple who reportedly migrated from Jamaica to the USA.

Delton Brown, 32, and his wife, Amoya, 29, were “actively involved at the West Side Worship Centre in Englewood”, New Jersey, and were being hailed for their devotion to each other and their church.

A fire allegedly started on the second floor of their house on Arlington Avenue in Teaneck just after 3am on Thursday, a report from CBS New York said.

The couple were found on the third floor and “did not survive”, the report shared.

Later in the day as news of the tragedy spread, loved ones gathered across from the scene for “an emotional prayer vigil”.

Bishop Winston George Christian, the pastor of West Side Worship Center, reportedly told CBS New York that Amoya was like his daughter.

“When she migrated here several years ago, she spent every Christmas at my home. Delton is my right hand,” he said, adding that he officiated at the couple’s wedding five years ago.

“I don’t know what I’m going to do without them,” Christian said, adding “They’re that integral a part of our ministry here.”

While indicating that the couple were “originally from Jamaica”, the article stated that the Browns “did not have children.”

Police authorities did not say what caused the house fire, CBS New York reported, while noting that the matter was, however, under investigation.

A friend of the Brown family has since set up a GoFundMe account to raise money for the couple’s funeral expenses.