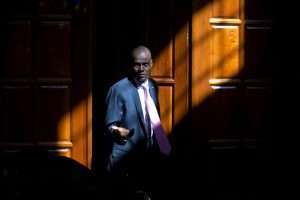 (AFP) — At least 28 people carried out the assassination of President Jovenel Moise, Haitian police said Thursday, adding that 26 of them were Colombian and two were Americans of Haitian origin.

“We have arrested 15 Colombians and the two Americans of Haitian origin. Three Colombians have been killed while eight others are on the loose,” national police director general Leon Charles said at a news conference.

On Wednesday police said four of the suspects had been killed. Charles did not explain the discrepancy.

He also said the “weapons and materials used by the assailants have been recovered”.

Charles spoke a day after Moise and his wife Martine were attacked by gunmen at their private residence in the capital Port-au-Prince.

Moise was shot dead in the early morning attack, and his wife was wounded. She has been taken to Miami by air ambulance and authorities have said her condition is stable.

The poorest country in the Americas now has no president or working parliament and two men claiming to be in charge as prime minister.

Charles vowed the hunt for the other alleged assassins would continue.

“We will strengthen our investigation and search techniques to intercept the other eight mercenaries,” he said.