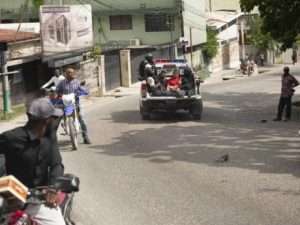 (AP) — Two men believed to be Haitian Americans — one of them purportedly a former bodyguard at the Canadian Embassy in Port au Prince — have been arrested in connection with the assassination of Haiti’s president, a senior Haitian official said Thursday.

Mathias Pierre, Haiti’s minister of elections, told The Associated Press that James Solages was among six people arrested in the 36 hours since the brazen killing of President Jovenel Moïse by gunmen at his home in the pre-dawn hours Wednesday.

Four other suspected assailants were killed and two are still missing, Pierre said.

Pierre would not provide additional details about Solages’ background, nor would he provide the name of the second Haitian-American he said was arrested.

Solages describes himself as a “certified diplomatic agent,” an advocate for children and budding politician on a website for a charity he established in 2019 in south Florida to assist residents.

On his bio page for the charity, Solages said he previously worked as a bodyguard at the Canadian Embassy in Haiti.

Calls to the foundation and Solages’ associates at the charity either did not go through or were not answered.

“The pursuit of the mercenaries continues,” said Léon Charles, director of Haiti’s National Police, in announcing the arrest of suspects.

“Their fate is fixed: They will fall in the fighting or will be arrested.”

Witnesses said two suspects were discovered hiding in bushes in Port-au-Prince on Thursday by a crowd, some of whom grabbed the men by their shirts and pants, pushing them and occasionally slapping them.

Police arrived shortly afterward to arrest the men, who were sweating heavily and wearing clothes that seemed to be smeared with mud, an Associated Press journalist at the scene said.

Officers placed them in the back of a pickup truck and drove away as the crowd ran after them to the nearby police station.

Once there, some in the crowd chanted: “They killed the president! Give them to us. We’re going to burn them!”

One man was overheard saying that it was unacceptable for foreigners to come to Haiti to kill the country’s leader, referring to reports from officials that the perpetrators spoke Spanish or English.

The crowd later set fire to several abandoned cars riddled with bullet holes that they believed belonged to the suspects, who were white men.

The cars didn’t have license plates, and inside one of them was an empty box of bullets and some water.

At a news conference Thursday, Charles, the police chief, asked people to stay calm, go home and let the police do their work as he warned that authorities needed evidence they were destroying, including the burned cars.

Officials did not provide any details about the suspects, including their nationalities, nor did they address a motive or say what led police to them.

They said only that the attack condemned by Haiti’s main opposition parties and the international community was carried out by “a highly trained and heavily armed group.”