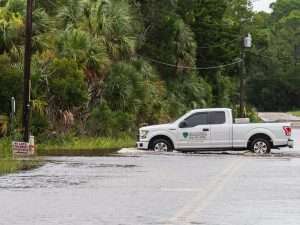 (AFP) — Tropical Storm Elsa made landfall in Florida on Wednesday, lashing the Gulf Coast of the southern US state with wind and rain but losing strength as it moved inland.

The National Hurricane Center (NHC) said the centre of the storm, which was downgraded from a Category 1 hurricane overnight, made landfall in Taylor County along the Gulf Coast of northern Florida.

“Continued weakening is expected through tomorrow as Elsa moves over land” on a northern trajectory, it said.

Tampa airport suspended commercial flights from Tuesday into Wednesday, but the storm ended up making landfall well to the north of the third-largest city in Florida.

Elsa was logged as the first hurricane of this year’s Atlantic season before being downgraded to a tropical storm again.

The NHC said western and northern portions of the Florida Peninsula could expect between three and six inches of rain, raising the possibility of “considerable” flooding.

Tornadoes were possible on Wednesday in northern Florida, southeastern Georgia and eastern South Carolina, it said.

“This is not a time to joyride,” DeSantis said at a Tuesday night press briefing. “You do have hazardous conditions out there.”

Lieutenant Governor Jeanette Nunez called on Floridians to be prepared for the possibility of power blackouts and to stockpile adequate supplies of food and water.

Over the weekend, Elsa battered Jamaica and Cuba, claiming at least three lives as it cut a path of destruction through the Caribbean.

Elsa claimed two lives in the Dominican Republic and a third in the island state of Santa Lucia, the Caribbean Disaster Emergency Management Agency said.

Elsa had threatened to complicate an already challenging search mission for survivors of the June 24 deadly condo tower collapse in Surfside, a town north of Miami Beach on Florida’s east coast.

But the storm made landfall on the opposite coast allowing search teams to continue their work largely interrupted.

The confirmed death toll from the condo disaster rose to 46 on Wednesday with the discovery of 10 more bodies. A total of 94 people are still listed as missing.