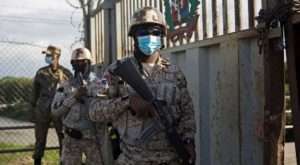 (AFP) — Four “mercenaries” were killed and two taken into custody after the assassination of Haitian President Jovenel Moise, police said Wednesday, adding that officers were conducting an operation in the capital Port-au-Prince.

“Four mercenaries were killed, two were intercepted under our control. Three policemen who had been taken hostage have been recovered,” said the Director General of Haiti’s national police Leon Charles in a televised statement.

He said police pursued the assassins immediately after the attack on Moise and his wife, who survived, at their home in Port-au-Prince early Wednesday.