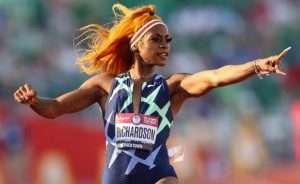 (NBC NEWS) – Runner Sha’Carri Richardson was not named to the U.S. relay team and will not compete in the Tokyo Olympics following her positive test result for marijuana, the governing body said Tuesday.

She will not be offered a shortened suspension to compete on the international stage later this month, USA Track & Field said in a statement.

“While USATF fully agrees that the merit of the World Anti-Doping Agency rules related to THC should be reevaluated, it would be detrimental to the integrity of the U.S. Olympic Team Trials for Track & Field if USATF amended its policies following competition, only weeks before the Olympic Games,” the organization said.

The governing body applauded Richardson’s accountability following the announcement of her suspension last week but said it would not grant her an exception despite “extenuating circumstances.”

The athlete learned her biological mother had died a week before her Olympic-qualifying 100-meter race victory. She told “TODAY” last week that it was a reporter who informed her of her mother’s death, adding that the news was “triggering” and “shocking.”

“I would like to say to my fans and my family and my sponsorship, to the haters, too, I apologize,” she said Friday. “As much as I’m disappointed, I know that when I step on that track, I don’t represent myself, I represent a community that has shown me great support, great love.”

Richardson failed a drug test after she qualified June 19 in the 100-meter race at the U.S. Olympic Track and Field Trials in Eugene, Oregon, and has accepted a one-month suspension. The United States Anti-Doping Agency said last week that she would have to be “disqualified, and she forfeits any medals, points, and prizes,” including her Olympic trial result.

Athletes who test positive for a substance of abuse, which THC was newly classified as in 2021, usually receive a three-month suspension if they can establish that “their use of the substance occurred out of competition and was unrelated to sport performance.”

Richardson “successfully completed a counseling program regarding her use of cannabis,” which under USADA rules reduces her ineligibility to one month.

The news that Richardson would not run in Tokyo came as a disappointment to many who were won over by her post-win interview at the Trials, where she said she wanted everyone to know “I’m THAT girl.” She ran 100 meters in 10.86 seconds with long eyelashes, neon hair and bedazzled nails.

Richardson thanked those who supported her following the news of her sanction last week, and on Friday, she apologized for not being able to compete for at least some of the Olympics. At the time, it was unclear whether she might participate in the relay event, which was later in the Olympic schedule. “I’m sorry, I can’t be y’all Olympic Champ this year but I promise I’ll be your World Champ next year,” she wrote on Twitter.