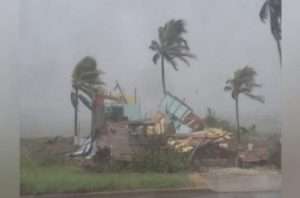 (CMC) — Hurricane Elsa was battering Barbados with strong winds on Friday as the centre of the first named storm for the 2021 Atlantic Hurricane season passed near St Vincent and the Grenadines and St Lucia.

Home Affairs, Information and Public Affairs Minister, Wilfred Abrahams, said while there were no immediate reports of serious injury or loss of life, he was urging residents to open their doors to neighbours impacted by the weather system, the first hurricane to hit the island in 65 years.

“Barbados, please be safe…property can be replaced so exercise your common sense in making your next decision,” he said, noting that the power outages were likely to continue as winds affected the network and grid.

Abrahams explained that officials would be unable to come out during the adverse weather to correct faults, adding “all we can do at this time is take the information and get a response ready for when it is safe to do so”.

Director of the Department of Emergency Management (DEM), Kerry Hinds, also urged residents to stay indoors and avoid venturing outside.

“We are in the brunt of the weather now. Once it is safe to do so, we will respond,” she said.

In its latest bulletin, the Miami-based National Hurricane Center (NHC) said the centre of Hurricane Elsa was located near latitude 13.4 north, longitude 61.2 west and is moving towards the west-northwest near 29 miles per hour (mph).

It said on this motion, the hurricane is expected to continue during the next couple of days, with some decrease in forward speed expected Sunday night.

“On the forecast track, Elsa will move away from the Windward Islands during the next several hours, move across the eastern Caribbean Sea later today and tonight, and move near the southern coast of Hispaniola late Saturday or Saturday night.

“By Sunday, Elsa is forecast to move near Jamaica and portions of eastern Cuba, and move near portions of central and western Cuba Sunday night and early Monday,” the NHC said, adding that the maximum sustained winds are near 75 mph with higher gusts.

“Little change in strength is forecast during the next 48 hours. Some decrease in winds is possible on Monday as Elsa interacts with Cuba,” it said, adding that hurricane-force winds extend outward up to 25 miles from the centre and tropical-storm-force winds extend outward up to 140 miles (220 km). The Hewanorra Airport in St Lucia recently reported sustained winds of 46 mph and a wind gust of 79 mph.

A Hurricane Warning is now in effect for the southern portion of Haiti from Port Au Prince to the southern border with the Dominican Republic. The government of Jamaica has issued a Hurricane Watch and Tropical Storm Warning for the island.

A Tropical Storm Watch is also in effect for Grenada and its dependencies, Saba and Sint Eustatius, north coast of the Dominican Republic from Cabo Engano to Bahia de Manzanillo.

The NHC said the storm surge will raise water levels by as much as one to three feet above normal tide levels in areas of onshore winds in the hurricane warning area in the Windward Islands and along the southern coast of Hispaniola.

Hurricane Elsa is expected to produce rainfall totals of three to six inches with maximum amounts of 10 inches today across the Windward and southern Leeward Islands, including Barbados. This rain may lead to isolated flash flooding and mudslides.