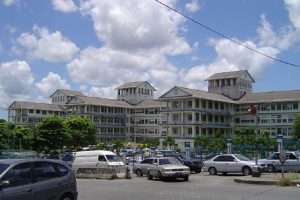 (TRINIDAD EXPRESS) – A probe has been launched into the circumstances which led to a pregnant Covid-19 patient prematurely giving birth and subsequently losing one of her twin babies at the San Fernando General Hospital.

“The pregnant mom did go to Augustus Long Hospital and had to be transferred back to San Fernando General Hospital to have the delivery done, as per the protocol. The two babies were critically ill and one of the twins has unfortunately passed away and we would like to take this opportunity to express condolences to both mother and father and her family at this time,” head of the South West Regional Health Authority (SWRHA) Dr Brian Armour said yesterday when asked for an update on the matter during the Ministry of Health’s Covid-19 news conference.

“The matter is undergoing the customary investigation in collaboration with the Ministry of Health,” Armour added.

The family of the 37-year-old Gasparillo woman, who was 27 weeks pregnant, told the Express on Monday that the Covid-19-positive mother was initially admitted to the San Fernando General after she became ill but was transferred to Augustus Long Hospital in Pointe-a-Pierre on Sunday morning for Covid-19 treatment.

The woman’s family said they were informed by an Augustus Long official that there were no obstetricians or midwives at the facility but that a consultant was on stand-by in case of emergency.

They said she began experiencing contractions on Sunday afternoon and requested a doctor’s assistance, however, was told that she was experiencing a panic attack.

They claimed that the consultant who was supposed to be on stand-by never saw the pregnant woman.

The relatives said it was only after the woman’s private gynaecologist reached out to Augustus Long and advised doctors there of her condition, that she was rushed to the San Fernando General Hospital.

The woman’s twin girls, weighing less than two pounds each, were delivered at the San Fernando General Hospital and required urgent neonatal care.

One of the twins died on Tuesday morning while the other is in a critical state.

The devastated mother has questioned whether both babies would have survived if doctors at the Augustus Long Hospital had responded earlier.

Armour said yesterday that apart from the case involving the Gasparillo mother, general management for pregnant mothers follows national guidelines and that all protocols are followed, both in the regular system and the parallel healthcare system.

“Decisions are made by the clinical experts on the field, both in Augustus Long in infectious disease as well as the obstetricians. And the general principles are looking first and foremost at maternal health and well being,” he stated.

“So for a pregnant mother having Covid, we have to take care of the mummy first, so to speak, and therefore decisions are made in that regard. And thereafter, any issue that relates to the unborn baby or any issue that relates to delivery, then a separate clinical decision is made in order to ensure a safe and healthy delivery, which, at this time, will occur at the San Fernando General Hospital,” he added.