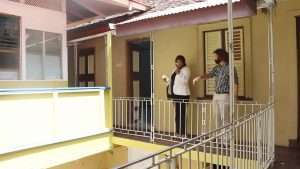 PR – Minister for Sports, Culture and the Arts, Fisheries and Co-operatives, Hon. Yolande Bain-Horsford made an inaugural visit to the Grenada National Museum as part of her round of visits to statutory organizations which fall under the ambit of the Ministry.

The Minister was accompanied by the Permanent Secretary with responsibility for Sports, Culture and the Arts, Mrs. Ann Isaac; Chief Cultural Officer, Mr. Thomas Matthew; and Chairman of the Board of Directors of the Grenada National Museum, Alister Bain.

The Minister began her visit with a staff meeting during which she familiarized herself with the daily operations of the museum, discussed longstanding challenges faced by the staff which include administrative issues, the importance of having regularized contracts, and personal development training to improve the customer service provided to locals and visitors to the museum.

After meeting with the staff, Minister Bain-Horsford was given a tour to witness firsthand, work being undertaken at the museum, which include interior and exterior renovations of the building, fresh painting of the walls in the exhibition rooms, resurfacing and varnishing of the hardwood floors, transferring of artifacts from the ground floor to dedicated exhibition rooms throughout the second floor, and making maximum use of the entire building to exhibit the various artifacts and historical information on Grenada.

Chairman of the Board of Directors of the Grenada National Museum, Alister Bain, believes that the Minister is passionate about culture and expressed his delight with the Minister’s inaugural visit. Since the museum became a state-owned enterprise, the Government of Grenada has given financial support for the past four years, to ensure execution of its plans and projects.

Bain stated that the first challenge faced by the museum is the building. He said, “This structure is over 300 years old. It is one of the first hotels in Grenada and also one of the first prisons in Grenada – so the structure is pretty aged. While we want to renovate [and] ensure that we have an ambient workspace, we also have to be very cognizant of the historic importance of the building and not to change that outlook.”

The main building of the Museum was built with limestone in the early 1700s. Maintaining the infrastructure of older buildings like the museum can be quite costly; however, the Museum’s Board of Directors, with the Government’s assistance through the Ministry of Sports, Culture and the Arts, Fisheries and Co-operatives is making every effort to restore the historic attributes of the building such as the wrought-iron balcony overlooking Monckton Street.

Bain also revealed that the Board of Directors and staff are currently preparing for the reopening of the museum. He explained that “The collections that were stored in the museum, would have been in the basement [or ground floor] of the building. Those collections are now going to be removed from the basement and brought up to the [upper floor] where there would be a greater display – a more chronological display of the history and culture of Grenada laid out in the different sections of the building.”

He also revealed that most of the tenants have moved out of the building; the only tenant remaining is a food truck vendor located near Sendall Tunnel. The upper floor of the museum will now house the administrative offices and archives and will soon accommodate the Offices of Diaspora Affairs.

The Museum’s Curator, Dr. Jonathan Hanna highlighted that they are currently cataloguing all of the museum’s collections. On completion, the catalogues will be published in an online database for public viewing and research which will help further enhance the Museum’s educational and outreach programmes to a wider audience locally and internationally.

The Grenada National Museum was established in 1976 and currently stores over two hundred thousand artifacts. The Museum plans on reopening its doors to locals and visitors in the last quarter of this year.