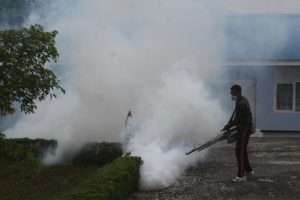 PR – The Grenada Technical and Allied Workers’ Union hereby informs the public that as of today Wednesday June 30, 2021, members at the Vector Control Division of the Ministry of Health will not be conducting any fogging operations but other operations such as inspections will be carried out pending the outcome of a meeting to be held between the workers and Management on Thursday, July l, 2021.

This action has become necessary following reports of recent threats being made by homeowners/occupants against members at the Vector Control Division of the Ministry of Health while in the process of carrying out their duties. These threats were reportedly made to the workers while carrying out the crucial function of Fogging Operations to eliminate the Aedes Aegypti mosquito in the continued fight to prevent dengue fever. The most recent incident was reported to have taken place on Tuesday, June 29, 2021.

On receiving the reports about the workers experience, the Union’s President General Comrade Andr6 Lewis, immediately visited the workplace at the Queen’s Park office, met with the workers and together with the Shop Stewards Comrades Rhonda Mc Queen and Connie Dottin engaged the Management on the way forward. safety and security of its members

The Union looks forward to having the addressed as a matter of priority.