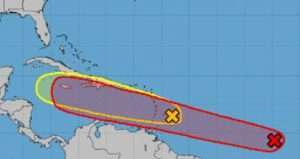 (SUN SENTINEL) – Forecasters are watching two tropical waves for signs of development — one is likely reach the southeastern Caribbean by Wednesday night and the other is trailing not far behind on an almost identical path.

Of the two systems, the one closest to the Caribbean has only a 10% chance of developing. Conditions are much more conducive for development of the second, which is likely to become a tropical depression in the next few days, the National Hurricane Center said early Wednesday.

Either could have South Florida inside its cone in a matter of days.

“We’re almost like a month ahead,” Miller said of storm tracking. “Usually when we get later into July or August is when we start really tracking these waves coming off the African coast for these developmental potentials. It’s not totally unheard of, but it’s not common we’re already keeping an eye out in the eastern part of the Atlantic.”

The way it appears now, however, South Florida won’t be hit with anything significant from either system. Perhaps some areas get some extra rain, or the daily thunderstorms are a bit stronger, but that’s about all, according to AccuWeather senior meteorologist Rob Miller.

The storm system closest to South Florida is likely to soon encounter storm-shredding wind shear that will weaken its intensity in the next couple of days as it moves across the eastern and central Caribbean Sea.

“Land interactions will probably prevent it from becoming too strong of a system,” Miller said Tuesday.

As of Wednesday morning, it was located a few hundred miles east of the Lesser Antilles, which form the eastern boundary of where the Caribbean Sea meets the Atlantic Ocean.

Trailing behind it is a second tropical wave moving west across the Atlantic that is expected to become a tropical depression this week.

“I do think the second feature, the one that’s farther east, might be a little bit more worrisome for a system,” Miller said. “But even that, I think, is going to skate by to the south and either bury itself down in Central America toward the end of next week, or maybe turn up toward Texas or Louisiana.”

The latest forecast from the National Hurricane Center indicates that conditions are highly conducive for its development. Its odds have risen to 60% over the next two days and 80% over the next five.

As of 8 a.m. Wednesday, it was crossing the Atlantic on a path toward the Windward Islands. The islands mark the boundary between the Atlantic Ocean and the Caribbean Sea. The low pressure system is expected to continue to move west-northwest at 20 mph, nearing the Windward and Leeward Islands on Friday.

“I think it’s going to be safe to say at the moment it’s going to pass well south and west of Florida and not really be of a concern,” Miller said.

The next named storm would be the fifth of the season.

If a named storm were to develop from either system before Monday, it would usurp Tropical Storm Eduardo in the record books as the earliest-forming fifth storm in history. Eduardo formed last year on July 5.