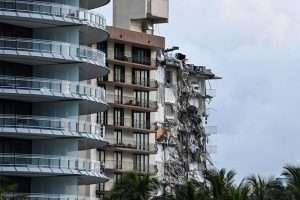 (AP) — Rescue workers digging for a fifth day into the remnants of a collapsed Florida condo building stressed Monday that they could still find survivors in the rubble, a hope family members clung to even though no one has been pulled out alive since the first hours after the structure fell.

The death toll rose by just four people Sunday, to a total of nine confirmed dead.

But more than 150 people are still missing in Surfside.

Their families rode buses to a nearby site to watch the intense rescue effort, which included firefighters, sniffer dogs and search experts using radar and sonar devices.

Early Monday, a crane lifted a large slab of concrete from the debris pile, enabling about 30 rescuers in hard hats to move in and carry smaller pieces of debris into red buckets, which are emptied into a larger bin for a crane to remove.

The work has been complicated by intermittent rain showers, but the fires that hampered the initial search have been extinguished.

Andy Alvarez, a deputy incident commander with Miami-Dade Fire Rescue, told ABC’s “Good Morning America” that rescuers have been able to find some voids inside the wreckage, mostly in the basement and the parking garage.

“We have over 80 rescuers at a time that are breaching the walls that collapsed, in a frantic effort to try to rescue those that are still viable and to get to those voids that we typically know exist in these buildings,” Alvarez said.

“We have been able to tunnel through the building,” Alvarez added.

“This is a frantic search to seek that hope, that miracle, to see who we can bring out of this building alive.”

Others who have seen the wreckage up close were daunted by the task ahead.

Alfredo Lopez, who lived with his wife in a sixth-floor corner apartment and narrowly escaped, said he finds ithard to believe anyone is alive in the rubble.

“If you saw what I saw: nothingness. And then, you go over there and you see, like, all the rubble. How can somebody survive that?” Lopez told The Associated Press.

Some families had hoped their visit to the site near the 12-storey building would enable them to shout messages to loved ones possibly buried inside the pile.

As they returned to a nearby hotel, several paused to embrace as they got off the bus.

Others walked slowly with arms around each other back to the hotel entrance.

“We are just waiting for answers. That’s what we want,” said Dianne Ohayon, whose parents, Myriam and Arnie Notkin, were in the building.

“It’s hard to go through these long days and we haven’t gotten any answers yet.”

The building collapsed just days before a deadline for condo owners to start making steep payments toward more than $9 million in repairs that had been recommended nearly three years earlier, in a report that warned of “major structural damage.”