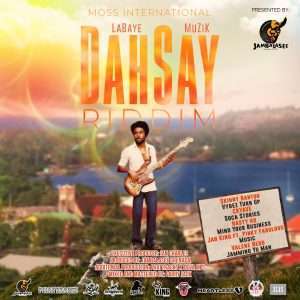 PR – JambalaseeGrenada’s core mission is the preservation and promotion of Grenada’s cultural heritage. A major element of our heritage is music.

Our “DahSay” Riddim seeks to highlight the many facets of MOSS International’s musical catalogue. Once one of the Caribbean’s premiere musical acts, MOSS

International is widely accredited with the formation of the Jab music genre.

This project however, spotlights the band’s unique interpretation on the sound of the French Caribbean known as Zouk, which was fused into what is known as “LaBaye MuZiK”.

The “DahSay” Riddim project is a remake of MOSS International’s 1990 zouk record “Dance the night away.”

As part of the #LaBayeMuZikProject, the “DahSay” Riddim seeks to marry historical elements and traditions with contemporary artists and creatives, while highlighting these collaborations on new media platforms.

The Riddim features some of the industry’s leading artists and trending personalities.

The artist roster is as follows:

This is the first time Jab King, who is largely considered the king of the Southside, will be featured together with Pinky Fabulous. A social media influencer & artist with strong ties to the entertainment and fashion industry, southside of the isle, and the trendy youth movement on the island.

An international Soca artist with multiple international hits to his resume. His contribution on the “DahSay Riddim” is one more added to his list of hits. DBDB

Emerged on the Soca scene in 2019 with his mega hit “Genie Lover.” CRYAVE is the voice of the future.

This Riddim marks the resurgence of Hasty Hd formerly known as Hasty on the soca scene. Hasty takes control of this timeless rhythm and produces an instant classic of his own.

We welcome back the man that gave us the infectious hits, “Anaconda” (Maranda) and “Daylight” just to name a few.

Known as the Queen of Grenadian Soca.

With a realistic storyline, she effortlessly delivers melodies and harmonies that will have you dancing the night away.

Nordley Frederick is the mastermind behind the mid 90’s Jab Music Revolution. Known popularly as Phattracks, his musical contributions span an unprecedented terrain. His Rhythm Mix catalogue and his notable, hit-defining projects such as and not limited to Tallpree’s ‘Old Woman Alone’, Scramppy’s ‘Mr. Kurkus’, Papa Jerry’s ‘Police’, Mario Castle’s Catholic and The Cellphone Riddim (first soca Riddim produced in Grenada) to name a few provide evidence of this.

Clint “Deva” Abreham is featured on the project in an effort to merge the new age with the foundation of yesteryear. One only has to look at his production of the international hit “Soak it good” by Skinny Banton, his mega hit “Keep calm” and his many heavily rotated riddims to understand the impact Deva has had on the industry so far.

We pay homage to one of MOSS International’s founders, core members, band’s manager and the bassman who created this infectious and timeless bass line. Our Riddim artwork is dedicated to Leon Charles, the Funky Calypso guru.

The infusion of the French Caribbean basslines with the FunkyCalypso being produced by the DonCharles lead MOSS International from #LaBaye ,African drums and the good old fashioned music fundamentals, evolved another dimension to the sound of LaBaye. #LaBayeMuZik Can You Feel It ?

…And we’ve been dancing the night away ever since…