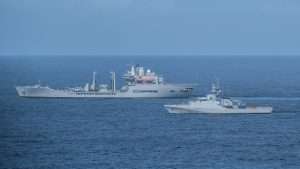 PR – The Royal Navy has formed a task force in the Caribbean to provide immediate assistance to the region throughout the 2021 Hurricane Season.

RFA Wave Knight has now joined the patrol ship HMS Medway to significantly enhance the assistance available in the event of a natural disaster. The two ships arrive in Barbados on 25 June for a short visit. They will be working with authorities in Barbados and across the region in the coming weeks to plan, prepare and co-ordinate any response if needed.

Backing up the ships, there are hundreds more people – and additional equipment – held at very high readiness in the UK, ready to fly into the region and support disaster relief efforts.

HMS Medway provides the Royal Navy’s permanent presence in the Caribbean and is now into her second storm season. She has been joined by the Royal Fleet Auxiliary support ship Wave Knight, with a Royal Navy Wildcat helicopter embarked alongside specialist personnel, equipment and supplies for disaster relief, including highly-skilled troops from 24 Commando, Royal Engineers.

“While we hope for the best, we must prepare for the worst. These ships are the first-responders of the UK’s plan for disaster relief in the Caribbean. We are all are proud to be working together with local authorities, helping people when they need it most.

“We have worked hard over the last few months to get ready for this role, and we will keep on training and preparing, learning from and cooperating with our partners in the Caribbean.”

Earlier this month, RFA Wave Knight delivered an assortment of aid from the people of Barbados and the World Health Organisation to St Vincent.

Individually and together, the two ships provide support and reassurance to Britain’s Overseas Territories and to Commonwealth states in the region. They are on hand to deliver aid in the event of natural disasters and work with local authorities to prevent drug trafficking out of the region.

The ships are making a brief visit to Bridgetown, Barbados following two weeks of exercises at sea. Together with US, French, Dutch and Canadian ships, they have participated in Exercise Tradewinds off Guyana. This US-led annual exercise was an excellent opportunity to practise cooperation at sea with other navies and coast guards in the Caribbean.

“It’s been really great to work with our partners during Tradewinds. After two weeks of training together, it will be much easier to cooperate in the months ahead.”