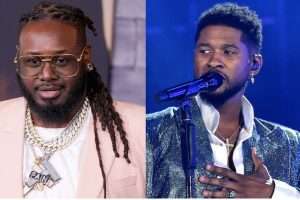 (URBAN ISLANDZ) – T-Pain says he went through four years of depression thanks to Usher.

T-Pain is probably the king of Auto-Tune but Usher thinks he ruined music for singers despite his success using the technology in his craft. In a new Netflix documentary, “This is Pop,” T-Pain claims Usher contributed to him being depressed for four years. In the clip which was posted on Instagram, T-Pain said the incident took place on a flight to the BET awards. He was told by the R&B icon that he ruined music by encouraging the use of Auto-Tune.

The singer, whose real name is Faheem Rasheed Naj, explained, “Usher was my friend. I really respect Usher. And he said, ‘I’m gonna tell you something, man. You kinda f***ed up music.’”

T-Pain said he thought the R&B singer was joking, but he was serious. He said he responded by telling Usher that he did not tell anyone to start using Auto-Tune.

T-Pain told the interviewer that the comment contributed to his long battle with depression.

Fans of the artiste have expressed shock and disappointment at Usher’s statement.

One Instagram user commented, “His artistry was THAT amazing that a singer who’s been successful since the 90’s said that he “ruined” an entire industry … smells like impact…. that’s LEGENDARY if you ask me. The power he has.”

The “Bartender” singer is known for a number of hits, including his breakout single “I’m Sprung,” “Buy U A Drank,” “Can’t Believe It,” and “Up Down.”

Other fans expressed anticipation for the new series set to air on Netflix. “This Is Pop” has eight parts and will feature artists such as Shania Twain, Brandi Carlile, Chuck D, Babyface, Orville Peck, Hozier, members of Boys II Men, Backstreet Boys, Blur, and many more. It’s set to air on June 22.