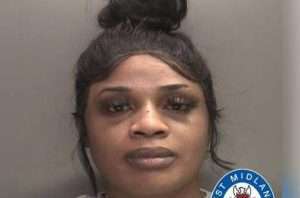 (JAMACIA OBSERVER) – Savage Karlene, a popular Jamaican figure on the British dancehall scene, was sentenced to nine years in prison after she struck a female partygoer repeatedly with a meat knife in 2019.

Savage, whose real name is Karlene Muschette, was found guilty of wounding the 34-year-old woman who she had been previously been involved with in an online feud.

The 38-year-old Jamaican, who also goes by the name ‘Karlene Savage’, was sentenced to the lengthy prison term on June 11, a statement from the West Midlands police disclosed last week.

According to the report, Muschette attacked the woman during a row between them at a beach-themed party at the Dog and Partridge pub in Broad Street, Bilston in Wolverhampton.

“Initially ice and water bottles were thrown during the incident in July 2019 before the situation escalated, and Muschette ran towards the woman who shouted ‘leave me alone’ before using a meat cleaver to slash her across the face and again on her back,” the police statement shared.

It added: “The woman tried to fight back but Muschette struck her head, resulting in her skull being fractured.”

The Jamaican woman contended that the attack was in response to “ongoing harassment over social media”, the West Midlands police further indicated.

At Muschette’s trial, a video of the fight at the party was used by the prosecution to aid in her conviction.

Meanwhile, Muschette responded to her conviction and subsequent sentence in a voicenote that has gone viral on social media.

In the voice recording, she blamed a particular female for recording the video of the fight, resulting in her subsequent conviction.

“… Is you tek out yuh phone and a video mi! Mi would a deh inna me house today, ’cause anuh nuh statement – ’cause nuh dunce people weh give statement could a neva send me down fi nine years,” Muschette ranted, declaring that “Mi soon come a road.”

She also warned members of the Dancehall fraternity to be careful of those persons who used their cellphones to record persons at events.

Despite those assertions from Muschette, Detective Constable Craig Bathgate, from force MID, said: “This was a complex investigation which involved multiple witness accounts and historical allegations.

“However forensic evidence and extensive investigations have ensured that Muschette has been brought to justice for this brutal attack which could have resulted in far worse, and even fatal, injuries. It is right that she has received a significant sentence for her actions,” he explained.