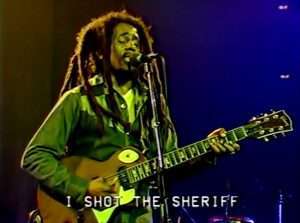 (JAMAICA OBSERVER) – ‘I Shot the Sheriff’, a 1973 original recording by Bob Marley and the Wailers, was last Friday certified silver for sales of more than 200,000 units in the United Kingdom.

The certification was issued by the British Phonographic Industry (BPI).

‘I Shot the Sheriff’ is included on Burnin’, the 1973 album by the iconic reggae band. The album reached number 151 on the Billboard 200 albums chart and number 41 on the US Black Albums chart in 1975.

A cover of ‘I Shot the Sheriff’ by singer Eric Clapton (it was included on his 1974 album 461 Ocean Boulevard) topped the Billboard Hot 100 chart in 1974 and was certified gold for sales of more than 600,000 copies by the Recording Industry Association of America (RIAA).

‘I Shot the Sheriff’ was released digitally in November 2005.

In 2003, Clapton’s version was inducted into the Grammy Hall of Fame.

American hip-hop artiste Warren G released a cover of ‘I Shot the Sheriff’ in 1997. It was certified gold in the United States and reached number two in the UK, number one in New Zealand and number 20 on the Billboard Hot 100 chart.