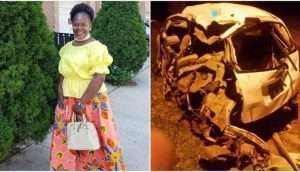 (NEWS ROOM GUYANA) – A 56-year-old overseas-based Guyanese woman died in an accident on Thursday night moments after arriving in the country for her mother’s funeral.

Dead is June Forde; her son, 37-year-old Michael Forde had just picked her up at the Cheddi Jagan International Airport (CJIA) and they were making their way to One Mile, Wismar Linden when the horrific accident occurred on the Hararuni Public Road Soesdyke, Linden Highway at around 17:30hrs.

Police Headquarters revealed in a statement that Michael was driving motorcar PTT 7073 in the opposite direction of motor lorry GZZ 2701, which was being driven by 25-year-old Cavel Carew north along the western side of the road.

The mangled car at the scene of the accident
It is alleged that while in the process of passing each other, Michael ended up in the western drive lane and collided with the front left side of the truck.

As a result of the collision, both vehicles received extensive damage and June was taken out of the vehicle in an unconscious condition, while Michael was conscious.

They were both placed into a passing vehicle and taken to the Diamond Diagnostic Centre where June was pronounced dead, while her son received a penetrated injury to his right eye; he was transferred to the Georgetown Public Hospital.

The driver of the truck was subjected to a breathalyzer test but no trace of alcohol was found on his breath.

He remains in police custody.