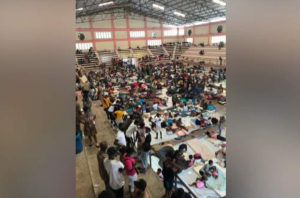 (AFP) — Daniella Francois sleeps each night on a small foam mattress in a gymnasium in the Haitian capital that has been converted into an emergency shelter, as she is unable to return to her Port-au-Prince neighbourhood which is in the grips of a gang war.

She is one of thousands of residents of the city’s western Martissant district who have become refugees in their own city, living in sports centres or temporary accommodations in private homes.

While the gym is just several hundred meters (yards) from the Martissant neighbourhood where Francois has lived her entire life, the move has nonetheless been jarring.

The 18-year-old orphan, who lives alone with her four-year-old daughter, had to flee suddenly on June 1.

“When the armed men finally arrived on my street, I had no choice, I had to leave,” she said. “The guys don’t play around — whoever is in front of them they do what they want with.”

Undermined by insecurity and political instability, Haiti is struggling to emerge from a string of seemingly never-ending crises, which of late have resulted in an upsurge in kidnappings and gang violence.

Joining a flood of families attempting to escape the insecurity, Francois ended up at the sports centre in Carrefour, a neighbouring community where municipal authorities have been providing assistance.

“We receive lots of help from the community, churches, associations, individuals who voluntarily bring food, clothes,” said Gutenberg Destin, who coordinates emergency preparedness for the municipality.

Aid from humanitarian agencies and other organizations in Port-au-Prince had to be mostly transported by helicopter to Carrefour, with gangs controlling two kilometres (1.2 miles) of the main road through Martissant.

An initial count on June 8 found more than 1,100 people staying at the sports centre, but the arrival of destitute families has not abated since then.

“Just last night, people arrived,” Destin told AFP on Tuesday. “Until then they felt safe in the area in which they lived in Martissant, but gradually the hotbed of insecurity is spreading.”

The hundreds staying at the centre only represent the tip of the iceberg as far as the population of displaced people is concerned.

More than 5,100 people are estimated to have taken refuge with host families scattered throughout Port-au-Prince or have otherwise fled to other provinces, a UN report released Monday said.

The document warns that among the displaced, some who are living with host families are suffering sexual abuse and even rape, including offers of “sex for shelter”.

At the Carrefour gym, Kettelene Chateau said she can count on neighbours to look after her children when she leaves during the day to search for new housing accommodations with her husband.

Due to the noise and overcrowding at the gym, she sent the two youngest of her five to stay with a friend in Carrefour.

At the sports centre, NGOs organise daily games so that the hundreds of children, who otherwise have little to do except wander among the mattresses, momentarily forget the ordeal they are living through.

“My children are smiling again and they are now able to sleep,” Chateau said, somewhat relieved but still worried for the future.

“My six-year-old is very aware and keeps asking me ‘Mom, when are we going to go home? Will we have to live somewhere else?'” she said.