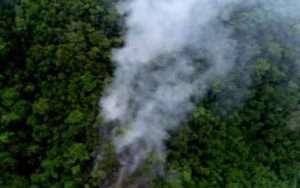 (CMC) — The Belize government Thursday said it has launched an investigation to determine the cause of what social media users say is a volcanic activity occurring in the mountains in the area of the Sleeping Giant, near St Margaret’s Village, Hummingbird Highway.

The Ministry of Natural Resources, Petroleum and Mining said the Geology and Petroleum Department, in conjunction with the Forest Department, has commenced investigations into the cause of the event.

“At present the cause or source of the plumes is unknown. The investigations will be concluded during the next few days and at that time the public will be informed as to the cause and any actions to be taken.

“The ministry advises the public to cease visitation to the area in the interest of safety until the joint investigation is concluded as there may be natural hazards and other safety risks that need to be determined,” it said in a statement.

Social media has been abuzz with theories of what is occurring with some people speculating that it may be volcanic activity, while others say it is a meteorite that struck in the area.

The billowing smoke is located some 8, 200 feet from the Hummingbird Highway, near the Rancho de la Lomas farm. But it can be seen from a distance with substantial smoke coming through the canopy of the thick lush forest of the Maya Mountains.

A resident of the Rancho de la Lomas Farm, told reporters that the event has been occurring since last Saturday.

He said that reports that it may be a fire was ruled out because it has continued despite the recent heavy rains.

“So I thought well okay, maybe it is a hot spring, but that didn’t quite figure because it is high up in the mountains. That only left steam – nothing else it could be. So what is causing the steam is the problem and that would have to be hot rocks of some kind with water falling on the rocks and coming up as steam.

“So something is either heating up the rocks from below or the water is filtering down to the hot rocks and coming back up as steam. And I expect that is what the geologists will have to establish,” he added.