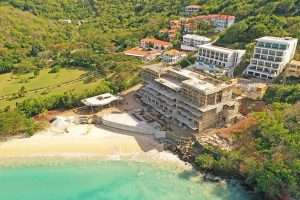 WASHINGTON, DC – (CARIBUPDATE/JUN 17, 2021) -THE DEVELOPERS of the Kimpton Kawana Bay hotel project in Grenada have sued the Keith Mitchell administration, accusing it of deliberately trying to frustrate the completion of the project.

The suit in the name of True Blue Development Limited was filed Thursday at the International Centre for Settlement of Investment.

The Washington-based ICSID is an arm of the World Bank devoted to resolving international investment disputes against sovereign states.

The Kawana Bay Project is being overseen by now-former Grenadian diplomat Warren Newfield, who resigned from his post citing what he called the anti-business tendency of the Mitchell government.

A day later Mitchell, in a tirade in the House of Representatives protected by parliamentary privilege, suggested that Newfield had misappropriated investor’s funds. He also called his former diplomat racist.

True Blue submits that the urgency of the ICSID filing reflects the essential need to protect investors in Kawana Bay from what claimants say is an “obvious scheme” by the Government of Grenada to thwart the successful completion of this world-class resort.
Three of the buildings at Kimpton Kawana Bay are largely finished, and some 92% of condos have been spoken for, either through outright purchase or by confirmed reservation. However, the developers claim that the Government of Grenada started what it described as “a surreptitious, multi-front effort to squeeze the project into failure.

There is a suggestion in other quarters that government action against the project came at a time of fallout between Mitchell and Newfield.

True Blue alleges that the Government’s financial squeeze included revoking a 2017 approved project budget of US$99 million, imposing administrative rules that limit how the developer could use of investors’ money for the project, and ultimately halting approval of CBI applications that provide the principal source of capital.

Funding for the project primarily comes from private investors participating in Grenada’s Citizenship by Investment program, through which investors purchasing condos at Kawana Bay are able to gain citizenship.

There was no immediate reaction from the government of Grenada.
The last time Grenada was taken before the international body by an investor, it lost the suit to the Florida-based WRB Enterprises, over how it went about trying to regain control of the Grenada Electricity Services.

True Blue’s request for arbitration concludes: “The Government has not been candid about its motive for the senseless destruction of a five-star resort Project that has been bringing substantial benefits to the Grenada economy. The Grenada Government has much it cannot explain.”