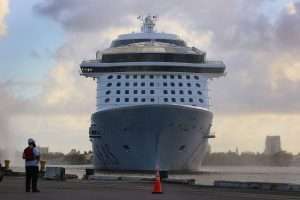 (AFP) — Royal Caribbean is pushing back the maiden voyage of a new ship by a month after eight crew members tested positive for COVID-19, the company’s chief executive said.

“Two steps forward and one step back!” Chief Executive Michael Bayley said in a Facebook post Tuesday night that announced the delay for the inaugural trip of “Odyssey of the Seas”.

“The eight crew members, six of whom were asymptomatic and two with mild symptoms, were quarantined and are being closely monitored by our medical team.”

The test results came after the staff was vaccinated but before the shots were fully effective, Bayley said.

The Odyssey voyage, is now set to depart from Port Everglades, Florida on July 31 instead of July 3.

The trip, which had departed from the Caribbean island of St Maarten on June 5, was the first by a major cruise ship to depart North America since the pandemic.

Everyone on the cruise had been vaccinated, including all crew, the company said.

Celebrity Edge, another Royal Caribbean ship, is scheduled to undertake the first major voyage from an American port since the pandemic on June 6 from Fort Lauderdale, Florida.