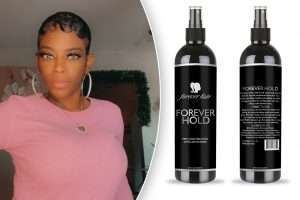 Tessica Brown launched her own line of hair care products Wednesday to profit from the viral infamy of getting her locks stuck for a month after using the extra-strong adhesive — and posting about her plight on social media.

The Louisiana mom — whose initial plea for help has been seen more than 50 million times on TikTok — launched her “Forever Hair” line on the website that’s already selling clothing with her image, including a screenshot from her video.

While the line does not appear to directly name her, she told TMZ that the inspiration was her own nightmare earlier this year.

Instead of extra-strong adhesive, Brown’s followers can use her $14 “Forever Hold,” which she told TMZ will hold a ponytail like glue, but without the nightmare side effects that made her famous.

And anyone suffering hair loss — as she did when needing a plastic surgeon to finally free her locks — can use her $18 “Growth stimulating oil.”

Brown promised that while the products were inspired by her saga, they will all wash out easily — without the need for surgery.

At least one more product is promised to be “coming soon” on the site, which sells clothing with her image as well as the logo, “Bonded for life.”

Brown went viral in February when she revealed how her hair was stuck together solid for a month after she used the extra-strong glue because she ran out of her usual hair product, Got2b Glued.

“Bad, bad, bad idea,” she admitted in the initial video.

In previous interviews, she has insisted her video was a genuine plea for help and not a stunt to make her famous.

“Who in their right mind would say, ‘Oh well, let me just spray this in my head and become famous overnight’? Never!” she previously told “ET.”