Drake & Shenseea Got A Collaboration Coming But Pregnancy Rumors Are False 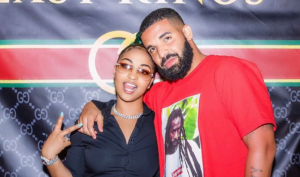 (URBAN ISLANDZ) – Drake and Shenseea got a massive collaboration coming, but those pregnancy rumors making the rounds are entirely false.

The long-awaited collab with Drake and Shenseea appears to be coming soon, but while neither of the artist’s camps has confirmed a definite date for release, the news is coming from an unseemly source.

It seems that news of the collaboration might be outside of the knowledge of fans. Nevertheless, word has been spreading among artists in the dancehall space, and now Urban Islandz can confirm that Drizzy and ShenYeng did some work in the studio. Sources told us that the track was recorded several weeks back, but it’s unclear if it will be on Drake‘s upcoming Certified Lover Boy album or if it will be on Shenseea’s forthcoming debut project.

News of the pending collab also came from one of ShenYeng’s biggest foes in dancehall.

Shenseea fans are speculating that Spice inadvertently dropped the news that Shenseea has an upcoming collab with Drake. In a video rant last week, Spice alleged that she did not record any music with Shenseea because her manager Romeich Major had a habit of badmouthing her. That’s when she let the cat out of the bag.

“Unu do song with 41 weh him name, 21 Savage weh him want name, unu have song a come out with Drake,” Spice said during her IG Live session.

Shenseea and Drake first sparked rumors in 2019 that new music produced by Rvssian was on the way after the trio was seen partying in the Turks and Caicos Islands in the Eastern Caribbean. Nothing official has been released by either of the artists, but on Thursday night, a weird rumor surfaced online claiming that Shenseea was pregnant for Drake. Sources told Urban Islandz that the stories are false.

Many fans felt it was a rumor created to spur promotion for new music from the pair. Neither has previously collaborated together but based on Drake’s reaction to Shenseea’s music, it seems that he is a fan. He first noticed her after the release of her song ‘Pon mi”