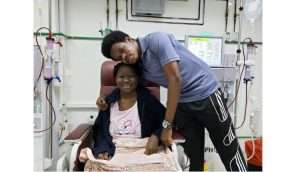 (GUYANA NEWS ROOM) – Doctors attached to the Georgetown Public Hospital’s Nephrology and Kidney Transplant Department will on Monday, June 14, mark a milestone as the team is set to perform its first operation on a patient from outside of Guyana.

Unable to access the services in her home country of Grenada, the patient, Dr. Germaine Bristol, turned to Guyana for help.

Her 19-year-old son, Gerron Bristol, will be donating his kidney.

Dr. Bristol explained to the News Room on Friday that she first fell ill back in 2012 while attending medical school in the United Kingdom.

After her diagnosis, she was put on dialysis and has been on the treatment for over nine years without hope since Grenada does not have transplant services.

“At present, we only have one privately owned Hemodialysis Unit, but we are in the process of opening a new Dialysis Unit at the General Hospital.

“By the time I get back home, that should be up and running, but we have no transplant services available,” Dr. Bristol explained.

It was after the team from Guyana visited Grenada on an outreach that Dr. Bristol met Dr. Kishore Persaud, the head surgeon on the team, who quickly got her vetted and approved her and her son for the operation.

Asked to share sentiments on her son’s sacrifice, Dr. Bristol said: “I am overwhelmed with pride and love and appreciation for what he’s doing for me.

“This is a gift that I never expected that I would receive and to be here, about to get the surgery from him..he’s my only son so it’s overwhelming.”

Dr. Persaud relayed to the News Room that the surgery is considered a huge milestone for Guyana, as it demonstrates that a third-world developing country can offer top medical care like that of first-world countries.

He added further that after the operation, Dr. Bristol would be able to lead a normal life again.

Former Health Minister, Dr. Leslie Ramsammy took to social media to express his pride in the work being done by the Department.

“For the first time, a patient from a CARICOM country will be a recipient of a kidney in Guyana. We have come a long way. This was unthinkable when I became Minister.

“People said impossible. We successfully did. It is great to see the Caribbean recognizing our progress as a country.

Another transplant operation will be performed on June 20.