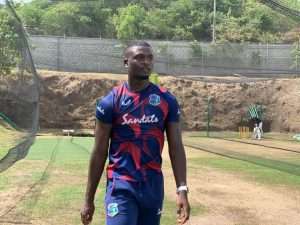 The two-match Test series will be played at the Daren Sammy Cricket Ground for the Sir Vivian Richards Trophy on June 10-14 and June 18-22. These are the final matches in the current cycle of the ICC World Test Championship. Both teams trying to finish higher in the final Championship table.

The 19-year-old’s only first-class match so far was for West Indies A in New Zealand last December, and in all, he has played only ten professional games at senior level. The youngster was particularly impressive in the Team Hamilton vs Team Blackwood four-day intra-squad fixture more recently, taking 4 for 40 in the second innings, including the wickets of Shai Hope and Darren Bravo.

Speaking on the squad selection, Roger Harper, the Lead Selector said that they are confident about Jayden Seales will add value to the side.