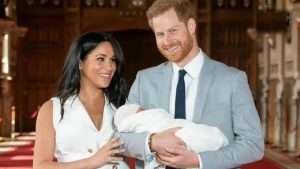 (NBC NEWS) – Prince Harry and his wife, Meghan, the Duke and Duchess of Sussex, have welcomed their second child, a daughter named Lilibet Diana.

The couple announced in a statement Sunday that their daughter was born Friday at Santa Barbara Cottage Hospital in Santa Barbara, California. She and Meghan are healthy and settling in at home.

“Lili is named after her great-grandmother, Her Majesty The Queen, whose family nickname is Lilibet,” the statement said. “Her middle name, Diana, was chosen to honor her beloved late grandmother, The Princess of Wales.”

The couple added a thank you to all their supporters, saying Lili “is more than we could have ever imagined, and we remain grateful for the love and prayers we’ve felt from across the globe.”

Buckingham Palace said in a statement that Queen Elizabeth, Prince Charles and Prince William and his wife, Kate Middleton, the Duchess of Cambridge, are “delighted with the news of the birth of a daughter for The Duke and Duchess of Sussex.”

Harry and Meghan have a son, Archie, who turned 2 last month. They announced that Meghan was pregnant with Lili in February, months after the duchess opened up about having had a miscarriage in July in a New York Times op-ed.

“Losing a child means carrying an almost unbearable grief, experienced by many but talked about by few,” Meghan wrote.

Lili shares her middle name with her cousin Princess Charlotte Elizabeth Diana, daughter of Prince William. She is expected to be eighth in line to the throne, following her brother.

Unlike her brother, who was born when Harry and Meghan were still living at Frogmore Cottage in Windsor, England, Lili was born on U.S. soil.

She isn’t the first child in the royal family to have been born in America. Maud Windsor, daughter of Lord Frederick and Sophie Winkelman, was born in Los Angeles in 2013, according to royal commentator Victoria Arbiter. Lord Frederick is the son of Prince and Princess Michael of Kent.

Harry and Meghan announced the sex of their second child in a tell-all interview with Oprah Winfrey that aired in March. Meghan told Winfrey that they didn’t have plans to have any more children and that Harry described feeling gratitude seeing their daughter’s ultrasounds.

“To have any child, any one or any two, would be amazing, but to have a boy and then a girl, what more can you ask for?” Harry said. “Now we’ve got our family. We’ve got the four of us and our two dogs, and it’s great.”