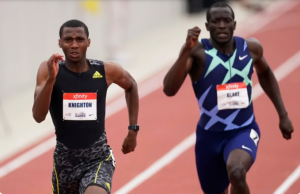 (YAHOO SPORTS) – Young Florida sprinter Erriyon Knighton is learning that if you break one of Usain Bolt’s longstanding records, everyone will be calling you “the next Usain Bolt.”

That’s what’s happening to Erriyon Knighton, who turned 17 five months ago and just broke Bolt’s junior record in the 200 meters. Knighton won with a time of 20.11, besting the record Bolt set in 2003 by .02 seconds.

Knighton, who turned professional shortly after his 17th birthday, was competing against a heavy hitter. He beat American Trayvon Bromell, the favorite to win the 100m at the Olympics next month. Bromell ran his best 200m time since 2015 and still fell short of Knighton.

Knighton was already drawing comparisons to Bolt due to his height. Bolt, who is tall for a sprinter, stands 6-foot-5, while Knighton measures 6-foot 3.

Sprinting isn’t a longtime passion for Knighton — he’s actually only been doing it for three years. He’s a wide receiver on his high school football team, and got into track his freshman year when his football coach suggested it after watching his speed on the field.

Knighton hasn’t been doing it for long, but he knows track is where his future is. Despite being recruited by several Division I schools to play football, he chose to go pro in track.

“Knowing that I grew up around football my whole life, and receiving a lot of D1 offers, it was a tough decision, but it was also a no-brainer,” Knighton told Track and Field News in February. “In track, the success of my career is fully in my hands, and I know that I can do it.”

Olympics in his future?

Knighton has qualified for the U.S. Olympic Trials, and will get his first-ever shot at the Olympics when they kick off in two weeks in Eugene, Ore. He’ll be the youngest U.S. track and field athlete since 1964, but he has a tall hill to climb if he wants to qualify. According to NBC Sports, Knighton’s 200m time places him 13th among Americans since 2019, and seventh since the start of 2021.

Plus, the 200m field is stacked. The top three times at the qualifier will make the Olympic team, and Noah Lyles, Kenny Bednarek, and Terrance Laird have the three fastest 200m times in the world since the start of 2020. Knighton’s recent junior record time is 20.11, and Lyles, Bednarek, and Laird have all run it in 19.81 or faster.

Knighton might be a long shot to make the Olympic team, but he firmly believes he has a bright future in the sport.

“It’s only my third season running track,” Knighton told Track and Field News. “I’ve been extremely successful in both training and competition. I believe if I work hard, I will eventually develop to be a world-class athlete. I’m soaking it all up, all the knowledge.”