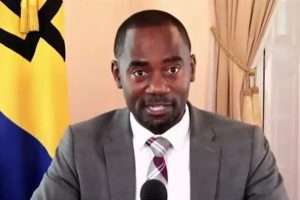 (CMC) — Small island developing states (SIDS) like those in the Caribbean have the capacity to find solutions and rebound from the effects of climate change through resilience building, says Minister of Maritime Affairs and the Blue Economy Kirk Humphrey.

However, he said those responsible will have to accept their errors and take decisive action to prevent a recurrence.

“We cannot do this on our own,” he said, as he addressed the Virtual Ocean Dialogues 2021 on the topic ‘Ocean and Biodiversity in the Run-up to COP15,’ hosted by the Friends of Ocean Action and the World Economic Forum on Tuesday.

The minister noted that countries like Barbados and the rest of the Caribbean were faced with a “raging climate” which they did little to offend, but would do everything to appease.

He explained that small island developing states face the effects of climate neglect annually between June and November, when they were most at risk of being devastated by a category four or five hurricanes.

In addition, he noted the challenges posed by the Sargassum seaweed, which overwhelmed beaches during some of the most beautiful months.

“Every year more of our popular west coast beaches are disappearing and our coral reefs are now a mere shadow of their former selves. We have it in ourselves to find solutions to these problems to adaptation and resilience building,” Humphrey said.

The minister called on the Caribbean to send a message to those who have done most of the damage to the environment, requiring them to do more in support of countries affected by their actions.

“Let us agree to continue these dialogues past the COP15 global forum as they provide the space for us to meet and collaborate on what we can do to ensure that we build sustainable oceans and sustainable solutions into how we treat our ocean environment,” he urged.

He warned that if countries did not look after the ocean, they stand to lose the marine flora and fauna.

Humphrey said Barbados had undertaken a number of initiatives designed to maintain a healthy ocean space and promote sustainable living, particularly for those whose livelihoods come from the sea.

These, he said, included the establishment of a ministry to target specific issues relating to the marine environment; partnering with the United Nations Development Programme to conclude the Blue Economy Scoping Study and initial action plan for the country; ongoing work on the strategic roadmap project with the Inter-American Development Bank, and work being done with the Food and Agricultural Organization to complete the new fisheries policy, Fisheries Management Act and the fish value chain project, which is designed to bring benefits to fishermen, while promoting sustainable fishing methods.

In addition, he noted that the Government also banned the use of single-use petroleum-based plastics in 2019 in an attempt to reduce plastics pollution in the ocean, and was presently defining a clear path to having zero carbon in our shipping.

However, the Maritime Minister called for an end to “green washing”, stating that countries could not “cheat and win the war against petroleum-based single-use plastics”. “Those of you who can stand, I urge you to stand up and to stand out,” Humphrey implored.