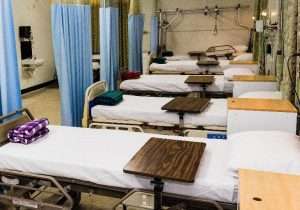 (TRINIDAD EXPRESS) – As Trinidad and Tobago continue its battle to level the curve of the current upsurge in daily Covid-19 cases, the demand for beds in the parallel healthcare system has continue to increase.

According to Dr Maryam Abdool Richards, Principal Medical Officer-Institutions, they have had to add 93 beds to the parallel healthcare system over the past 24 hours as well as an additional site of a step-down facility in Tacarigua.

Speaking during Wednesday’s virtual Covid-19 press conference, Richards said the Tacarigua facility is equipped with oxygen and for transitionary care and four persons who require such care have been activated at the facility, which has a full capacity of 38 persons.

“The Debe step-down facility was increased to a full capacity of 90 beds, and that’s a 40-bed increase as of yesterday. And the Point Fortin Hospital was increased by 15 ward level beds. The total capacity at that institution is now 75.

Richards noted that the total number of beds now available in the parallel healthcare system has been increased to 891.

She said the bed status is dynamic and is based on a supply/demand situation.

“We continue to try to increase the number and level the of beds in line with the demand for beds.

She said occupancy in Tobago continue to hold at 32 per cent, with a dis-aggregated 60 per cent Intensive Care Unit occupancy.

“When we dis-aggregated ward level figures, the total ward occupancy is at 67 per cent. This is a decrease from 73 per cent yesterday. Again due to the addition of the 93 ward level beds.

“In Trinidad and Tobago the ward occupancy decreased from 82 per cent to 72 per cent. With regards to the ICU and HDU (High Dependency Unit) levels, we do try to transition ward level beds at the Couva Medical and Multi-Training Facility, Arima General Hospital and at the Augustus Long Hospital, as well as now at the Point Fortin Hospital, from ward level beds to ICU level beds to HDU level beds, based on the level of care that is required.

“It’s important to note that the clinical course of patients with Covid-19 continues to be one in which patients are very ill and requires any time between five and 12 days at our hospitals. As such, we have noticed a variable occupancy level in terms of our ICU capacity. This morning we are at 80 per cent overall, with an 86 per cent occupancy in Trinidad and Tobago, which was an increase from 58 per cent yesterday.

“Again we have noticed a fluctuation in terms of the trend for High Dependency Unit beds, and at present we are at 48 per cent nationally, which is reflective of the Trinidad, and Tobago figure as well.

“At present we have 15 institutions in the parallel healthcare system for care of ill, confirmed Covid-positive patients. At this time in Trinidad where we have 13 facilities, approximately 12 of those facilities are above the red zone, which is 75 per cent. And what we’ve notice, in spite of us increasing beds, is they continue to be filled.”

She said they are looking at a net increase in beds of 31 cases per day across the system.

Encouraging the public to continue practicing the 3Ws of washing your hands, wearing a mask, and watching their distance, Richards said: “Let’s continue to be a resilient, responsible and civic-minded population as we continue to wash our hands, watch our distance, and let’s wear our masks properly.

“This is the only way we can close that gap, and we’re hopeful that if you practice these measures daily and continue to be your brothers’ keepers, we will overcome this war with Covid-19.”