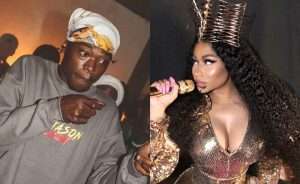 The dancehall deejay earned himself a Billboard Hot 100 hit with his Nicki Minaj assisted “Crocodile Teeth (Remix)“. The song was released on May 13 as part of Nicki’s “Beam Me Up Scotty” mixtape, now out on all streaming services.

The song debuted at number 100 on Monday, May 24, making this Skillibeng’s first US Billboard entry. “Crocodile Teeth (Remix)” has since cracked 2.5 million streams on YouTube and the same for Spotify, while getting 1.3 million streams on Apple Music. The original single already has over 20 million views on YouTube.

Ironically, Skillibeng was mercilessly dragged on Twitter some weeks ago, following his announcement about the collab with Nicki Minaj. The “Mr. Universe” deejay posted and soon after deleted a cover art displaying the collaboration with his October 2020 track, which had been hot in the streets for months before. This led fans to believe the artiste was lying and seeking clout, using Nicki Minaj’s name.

After the big drop on Nicki’s mixtape, the artiste was again trending as social media users who previously accused him were put to shame.

Skillibeng has perhaps been enjoying the significant boost and bolstered International reach since the song’s release. The remix trended at number 1on YouTube for three consecutive days after its release.

The gun-play track is currently the deejay’s biggest hit since getting his break in 2019 with “Brik Pan Brick.”

The artiste has been on the rise since, with a wide fan base, even wider now given the latest developments. Fans had projected that the “Coke” deejay would undoubtedly be making strides in the industry locally and internationally, and as such, he should take his music seriously.

As the news broke the internet on Monday, May 24, social media users were quick to commend the artiste, with hopes that he will use the opportunities from this new development wisely.

“Skilli get a big buss internationally, a just him fi know how him ago capitalize affa dis,” one person commented. Another added, “Skillibeng is the next dancehall superstar. I feel he has the potential to be bigger than any other artist right now.”

The remix with Nicki Minaj came just a few weeks after Skillibeng made links with international rappers Rich The Kid and Jay Critch and collaborated on “Real Boss.”