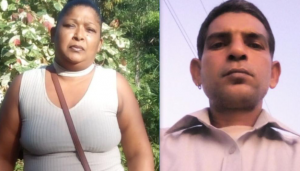 (TRINIDAD EXPRESS) – POLICE have responded to a murder-suicide at Caparo where a man bludgeoned his estranged wife to death and committed suicide overnight.

Detectives believe that Amar Zoongie beat Ann-Marie Diaz to death with a blunt object, then drank a poisonous substance.

Police suspect that she was bludgeoned to death with a length of wood.

The Express was told by a senior police officer that Zoongie’s body was discovered around 6.30 a.m. by a gardener who went to tend to his crops at farmlands in Todd’s Road.

A bottle containing a poisonous substance was found near the man’s body.

Residents were alerted and they went to Zoongie’s home nearby to inform Diaz of his death when her lifeless body was also discovered.

Diaz was found in a bedroom, with multiple head and upper body injuries.

Officers of the Longdenville police post and Central Division police were contacted.

A district medical officer examined the bodies and ordered its removal for autopsies.

Police said that Zoongie and Diaz had been in a common-law relationship for 17 years, but the relationship ended.

A senior officer told Express that Zoongie often drank alcohol, and Diaz had suffered physical abuse for many years.

Although the couple had separated, they continued to reside in the same house but occupied separate bedrooms.

Diaz, 47, was a mother of five children, police said.