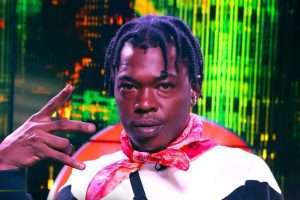 (JAMAICA OBSERVER) – HOT dancehall act Skillibeng has made his debut on the British pop chart with Crocodile Teeth debuting at number 74 on the United Kingdom Official Chart.

Crocodile Teeth was released last October and is co-produced by Johnny Wonder and Adde Instrumentals.

A remix of the song featuring rapper Nicki Minaj was released a week ago by Republic Records in the United States.

Skillibeng is the first Jamaican to score an entry on the British chart in seven months. Last October, Come Over by Jorja Smith featuring Popcaan reached number 35.

Skillibeng has been a fixture on local charts since he shot onto the scene in late 2019 with Brik Pon Brik. His subsequent hit songs include Coke, Shake (remix featuring Jada Kingdom), Mr Universe, Bin Laden and Torpedo.

“It’s a great feeling to know I’m signed by one of the biggest names in the publishing industry — I appreciate being a part of the team and I’m excited to be working with them,” Skillibeng told Jamaica Observer at the time.

Born in St Thomas, Skillibeng’s given name is Emwah Warmington. He attended Morant Bay High School and did one year of sixth form at Seaforth High School, both located in that parish. He, however, discontinued school to pursue music.