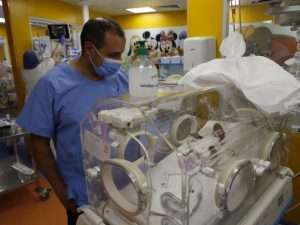 (AP) — Nine premature newborns that a 25-year-old Malian woman gave birth to are being closely monitored in a Moroccan clinic, with medical staff working around the clock to stabilize their health.

Halima Cissé gave birth to the nonuplets — five girls and four boys — earlier this month in Morocco after the Malian government flew her there for specialist care. The babies weighed between 500 grams to 1 kilogram (1.1 pound to 2.2 pounds) at birth.

Reports show that only two other sets of nonuplets have been recorded since the 1970s, but the babies all died within days.

“It is a pride for all of Morocco,” said Youssef Alaoui, director of the Ain Borja Clinic in Casablanca, where the newborns are being treated. “Now the challenge is to get these babies out in good health.”

One doctor said Cissé’s nonuplets are stable but fragile.

“They are very immature babies. They have deficiencies in everything — at the level of the lungs, the head, the heart,” said Khalil Msaif, the clinic’s paediatric neonatologist.

But there’s also a quiet sense of optimism from staff on the babies’ future.

“Since the birth, we are in week three and the condition of the babies is stable… Most of the babies have had a good period without any problem. We hope that all will be well,” Msaif said.