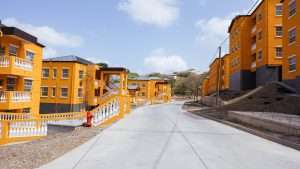 PR – Government has delivered on its promise to provide safe and affordable housing for people in Carriacou.
One hundred (100) China Aid Low-Income housing units were handed over on the sister-isle on Tuesday.
The handover at Dumfries, is the third of five sites to be completed under the second phase of the Chinese housing project, which once complete, will provide 647 housing units to Grenadian families.
Units at the Villa in St. Patrick and Diamond St. Mark have already been handed over.
Prime Minister Dr. the Right Hon. Keith Mitchell pointed out that the ripple effect of owning a home is greater stability and security for families; and a positive impact on the socio-economic development of the country.
He reminded the people of Carriacou that this journey started under the late Parliamentarian Elvin Nimrod.
He said although Mr. Nimrod has passed on, his dream for Carriacou has been realized.
“If Brother Nimrod was here today, I know that he too would have been immensely pleased that this project has materialized. He was there when the project was just an idea and he bargained hard to get more than what was originally intended to be built. So please say a silent prayer of thanks that he was able to champion your cause and secure more units for you, his beloved constituents. I urge beneficiaries to take good care of the facilities both your personal space and common areas. Let this be a gift that keeps on giving so that the future generations of your families can benefit from those facilities”.
Parliamentary Representative for Carriacou and Petite Martinique Affairs Hon. Kindra Maturine-Stewart said residents are grateful for this gift that represents hope and stability.
“This project is a gift from the People’s Republic of China whom we’ve had close ties and relations with since 2004. Therefore, this project would not have been a reality without this generous donation by the People of China. Ambassador, we are immensely grateful for same and let me assure you that the people of Carriacou and Petite Martinique will greatly benefit from this. Their lives will be touched”.