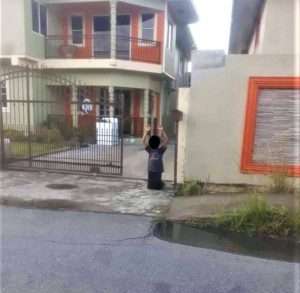 (TRINIDAD EXPRESS) – THE Child Protection Unit has begun investigations into a ten-year-old boy being made to kneel roadside at the gate to a house in Carapichaima on Monday.

Authorities were alerted around 5.30 p.m. when the child was seen by passers-by and motorists kneeling with his hands upraised.

A resident captured an image of the incident and posted on social media, but took down the post shortly after.

A passerby stopped upon seeing the child kneeling on the road, then spoke to an adult in the porch area of the house.

The child then returned into his home and the gate was closed.

However, the passerby remained at the gate and informed a team of Customs and Excise officers who, were on their way to another location to conduct an exercise, about the incident.

The officers questioned the child’s mother and other adults at the house.

Head of the CPU Insp Claire Guy-Alleyne told Express on that she and other members of the CPU are actively investigating the matter.

Guy-Alleyne said, “It is really sad to see this happening to a child in 2021. Children are already not in a normal state having to deal with the pandemic, not being among their friends”.

“We will be investigating whether or not the punishment was reasonable for this child”, she said.