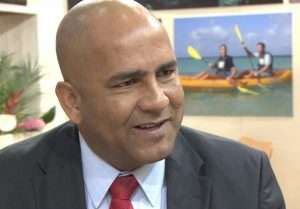 PR – Amicable discussions were held on Tuesday, as the Minister for Labour, Honourable Peter David, continued mediation in the ongoing dispute over the 4% salary increase due to teachers and public officers for 2021.

The Minister, in his capacity as mediator, held joint talks with representatives of the Government’s Negotiating Team and the Grenada Union of Teachers. This came about after separate meetings with each party over the last two weeks.

Giving an overview of the positions of both parties, Minister David said, “Both sides have indicated a clear desire to resolve the matter.”

At Tuesday’s meeting, proposals were tabled by both sides for consideration. The talks were amicable and focused on bringing the parties closer to a compromise.

The Minister for Labour will convene a second meeting with both parties early next week to review the responses to the proposals tabled at Tuesday’s meeting.

The Minister is hopeful that a mutually satisfactory resolution will be reached.