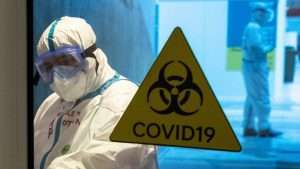 (COMPLEX) – A 76-year-old woman in India, who was believed to have died from COVID-19, came to life moments before she was to be cremated as her family members prepared for her last rites, India Today reports.

The woman, identified as Shakuntala Gaikwad, had tested positive for COVID-19 a few weeks ago. After her condition worsened, family members drove her to a Silver Jubilee Hospital on May 10 but were unable to secure a bed for her because all the wards were full.

As they waited in the car, the woman became unconscious, leading the family to believe she had passed away. The family took her back home and started preparing for cremation. As the relatives mourned the loss, the woman was placed on the bier for her final journey. Just before the funeral bier was about to be set alight, Gaikwad opened her eyes and began crying, according to India Today. Local policeman, Santosh Gaikwad, confirmed the incident had taken place.

The news arrives amid a devastating surge in COVID-19 in India. Two weeks ago, the first of several emergency relief shipments from the United States arrived in India, as the Biden administration sent more than 400 oxygen cylinders, nearly a million test kits, additional personnel protective equipment, and therapeutics.

According to CNN, since the start of the pandemic, India has recorded more than 24 million cases, second only to the United States. More than 270,000 people have died.

According to a projection model from the Indian Institute of Science, at the current rate of spread, India’s case numbers could rise to 50 million by June 11, with 400,000 deaths.