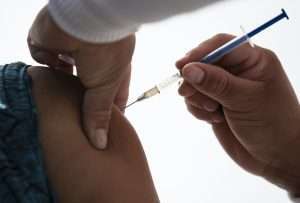 (AFP) — The WHO urged wealthy countries Friday to stop vaccinating children against COVID-19 and instead donate doses to poorer nations, while warning that the pandemic’s second year looked set to be more deadly.

Instead of offering jabs to young and healthy people, he called on countries to give their doses to the Covax global vaccine-sharing scheme and thereby ensure that those most in need in all countries receive protection.

“In January, I spoke about the potential unfolding of a moral catastrophe,” he told a press conference.

“Unfortunately, we’re now witnessing this play out. In a handful of rich countries, which bought up the majority of the supply, lower-risk groups are now being vaccinated.

“I understand why some countries want to vaccinate their children and adolescents, but right now I urge them to reconsider and to instead donate vaccines to Covax.

“Because in low and lower-middle income countries, COVID-19 vaccine supply has not been enough to even immunise healthcare workers, and hospitals are being inundated with people that need lifesaving care urgently.”

Nearly 1.4 billion doses of COVID-19 vaccines have been injected in at least 210 territories around the world, according to an AFP count.

Just 0.3 per cent have been administered in the 29 lowest-income countries, home to nine per cent of the world’s population.

In the face of this inequity in access, Tedros warned that the world would likely see more deaths this year than last, despite the arrival of vaccines.

“We’re on track for the second year of this pandemic to be far more deadly than the first,” he said.

“Saving lives and livelihoods with a combination of public health measures and vaccination — not one or the other — is the only way out.”

The novel coronavirus has killed at least 3.3 million people since the outbreak emerged in China in December 2019, according to a tally from official sources compiled by AFP.

Tedros, 56, meanwhile said that he had been vaccinated against COVID-19 earlier this week in Geneva, the Swiss city where the WHO is based.

“It was a bittersweet moment,” he said, explaining that his thoughts were with health workers around the world who had been battling the pandemic.

“The fact that so many are still not protected is a sad reflection on the gross distortion in access to vaccines across the globe,” Tedros said.