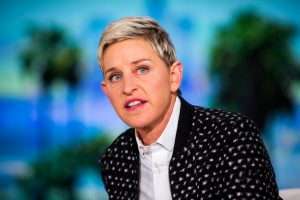 (NEW YORK POST) – Ellen DeGeneres is ending her talk show after 19 seasons, more than 3,000 episodes and a flurry of toxic workplace allegations.

The beloved-turned-beleaguered talk show host is calling it quits amid the claims of unkind behavior and bullying, as well as reports of a significant dip in sponsors and ratings.

“Ellen is ending when her contract is up at the end of the 2022 19th Season,” a source close to the star told The Post on Wednesday.

Another production insider told The Post: “The truth is there’s a lot of gratitude among her staff that she didn’t just quit after last summer, and has kept them all employed this season during a pandemic. And now, they all get to work for a whole other season next year.”

DeGeneres herself confirmed the news — which was first reported by the Daily Mail — to the Hollywood Reporter, saying the exit was planned — and it comes on her own terms.

“When you’re a creative person, you constantly need to be challenged – and as great as this show is, and as fun as it is, it’s just not a challenge anymore,” DeGeneres, 63, told the industry outlet.

Sources tell Page Six that her slot may be filled by singer Kelly Clarkson, 39, whose own talk show airs after DeGeneres’ 3 p.m. spot.

DeGeneres said the plan to end after 19 seasons had been in place well before claims surfaced of her behavior behind the scenes.

“I was going to stop after Season 16,” but pushback from “affiliates and the stations” had her settling for three more seasons, she said. “That’s been the plan all along.”

This news comes amid ongoing drama the embattled comedian has faced, including allegations of bullying and bad behavior behind the scenes that broke over the summer of 2020 — which contrasted with DeGeneres’ bubbly onscreen persona.

In the interview Wednesday, DeGeneres denied that she was ending the show over the allegations.

“If I was quitting the show because of that, I wouldn’t have come back this season,” she said. “So, it’s not why I’m stopping.”

Hearing former staff share stories of behind-the-scenes behavior did affect her personally, she said. The claims “destroyed me, honestly. I’d be lying if I said it didn’t.” However, she went on to criticize today’s cancel culture.

“This culture we’re living is [is one where] no one can make mistakes. And I don’t want to generalize because there are some bad people out there and those people shouldn’t work again but, in general, the culture today is one where you can’t learn and grow, which is, as human beings, what we’re here to do.”

Meanwhile, ratings for her show dropped significantly. And on July 31, it was reported that the host was thinking of abandoning her star-studded enterprise, which has taped at the Warner Bros. Studios in Burbank since its premiere.

Various celebs have spoken out in support of DeGeneres, including Katy Perry.

In September 2020, DeGeneres addressed the allegations that she’s created a “toxic workplace” environment in an opening monologue.

“As you may have heard, this summer there were allegations of a toxic work environment at our show and then there was an investigation,” she said. “I learned that things happened here that never should have happened. I take that very seriously and I want to say I am so sorry to the people that were affected. I know that I am in a position of privilege and power and with that comes responsibility and I take responsibility for what happens at my show.”

“The Ellen DeGeneres Show” started airing in 2003 and has aired for over 3,000 episodes.

DeGeneres told THR she may consider doing a movie next, but will be mostly focusing on her conservation work. And though she distanced herself from the claims of toxic workplace culture, she did acknowledge a lesson gleaned from the accusations.

“You realize that every single encounter means something. And if, for whatever reason, one day I wasn’t dancing when I’m in the dry cleaners or I didn’t smile at somebody, it’s like, ‘Oh, did that affect somebody? Was that what they meant?’ ” she said. “And I don’t know, but I know that I’m just a person with a lot of different emotions and I struggle with depression and with anxiety. So, every day I’m not super smiley, but my intention is never to hurt anyone.”