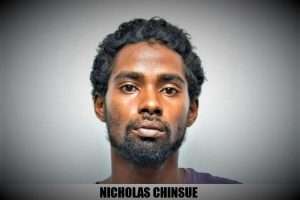 Nicholas Chinshue, 31 of Rousillac was ordered as a conditions of his bail, to stay away from the area the girl lives and to have no form of communication with her or her family.

Chinshue appeared virtually before senior magistrate Aden Stroude on Monday. He was charged with the sexual penetration of a female under the age of 18 years. The charge was laid under the Children’s Act by Sgt Taylor of the Child Protection Unit.

Police prosecutor Sgt Jitmansingh recommended the conditions to be imposed should bail be considered.

Stroude placed the conditions before adjourning the mater to June 7.

Chinshue was arrested last Saturday following an investigations that involved a 13-year-old who went missing in February 2020. The girl was allegedly found four days later at the home of a man.