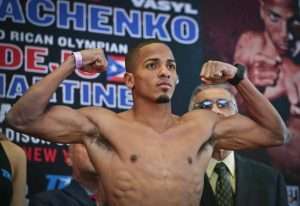 (AFP) — Puerto Rican former Olympic boxer Felix Verdejo pleaded not guilty Tuesday to the killing of his pregnant lover and their unborn child, in a case that has fanned outrage over violence against women in the US territory.

Verdejo entered his plea in a virtual hearing from prison to the charges that include the murder and kidnapping of Keishla Rodriguez, who was pregnant at the time.

Her death sparked protests in Puerto Rico, which declared a state of emergency in January over its deep-rooted problem of violence against women.

A federal complaint obtained by AFP stated that Verdejo, who is married and was also in a relationship with Rodriguez, allegedly kidnapped the victim in April after she told him she was pregnant.

Verdejo asked another person, whom the affidavit refers to as a “witness,” for help in terminating Rodriguez’s pregnancy.

Verdejo — who in his career won 27 fights, 17 by knockout — “punched the victim in the face, and she was injected with a syringe filled with a substance,” stated the affidavit by the FBI agent who led the investigation.

According to the affidavit, Verdejo and a witness tied Rodriguez’s hands and feet with wire, and tied her to a block.

Then they drove to a lagoon in San Juan, where she was “tossed off the side of the bridge and into the water,” the affidavit said.

Verdejo, who is being held without bail, then shot Rodriguez when she was already in the water.

The defendant and his alleged accomplice, Luis Antonio Cadiz, have been charged with carjacking, kidnapping resulting in death and killing of an unborn child.

In another teleconference hearing on Tuesday, Cadiz pleaded not guilty to the charges he shares with Verdejo. He is also being held without bond.

The US territory has seen sustained levels of violence that on average result in one woman’s death per week, a 2019 report from non-profit advocacy groups Proyecto Matria and Kilometro Cero said, echoing a problem in other Caribbean and Latin American countries.