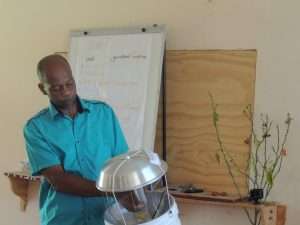 PR – Some farmers of the Eastern Agricultural  District are now more knowledgeable in combatting pests, particularly the Flower-Bud Moth in  peppers.

This pest is a micro moth, which lays its egg on the leaves of the crop, resulting in the young larva  boring its way into the young fruit. As a result, the fruit does not grow and develop, resulting in  tremendous damage and loss for farmers.

The Eastern Extension District of the Ministry of Agriculture hosted a one-day session on  Integrated Pest Management for Farmers in Union and surrounding communities in St. Andrew,  on May 6, 2021. The Ministry was responding to complaints about the effects of the Flower-bud  Moth on peppers.

Integrated Pest Management is described as an eco-system based strategy that focuses on long term prevention of pests or their damage, through a combination of techniques such as biological  control, habitat manipulation, modification of cultural practices, and use of resistant varieties.

Facilitator, Pest Management Officer Mr. Thaddeus Peters explained these and more as he  demonstrated the best practices that should be administered in dealing with the Flower-bud  Moth. “When a problem becomes widespread, you need to focus on area wide management. You must ensure that all the farms in the area, growing that particular crop, are trying to effect  some sort of control and that is how you would reduce the scale of the problem,” Peters stated,  as he encouraged management of the pest.

He further advised weed management as one of the methods to combat the Flower-Bud Moth.

“Moths tend to flutter around weeds. Sanitation, apart from weeding, is critical to remove those  small fruits that are already infected. Don’t pick them and drop them in the field and don’t ignore  them when you are doing your other harvests,” he cautioned.

According to Peters, the moths use the fruit to complete their life cycle. He further explained that  farmers would notice a tiny hole at a certain stage in the ripe fruits, which is an indication of the  emergence of a new moth, ready to cause more damage to the crop.

Supervisor for the Eastern Agricultural District, Maximus Lazarus, advises against the constant  use of chemicals in dealing with this pest. He said, “Every organism has an environment under  which it functions best, and farmers need to understand the environment under which the pests strive and create an environment that is not suitable for them and we would have a serious  reduction.”

More than 20 farmers attended the session. One of the participants, Finbar Hopkin, said these  engagements with farmers are needed to help ensure success within the industry.

“I think it was very informative; farmers have a lot to benefit from these sessions,” he said.

With contributions from input supply shops like Farm and Garden, PJ & L and Bristol’s Pest,  farmers were given a complete lesson on pest management and pesticide use.