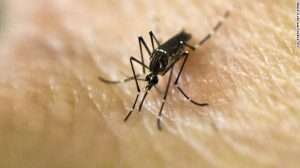 (CMC) — The Caribbean Public Health Agency (CARPHA) has urged residents of the region not to neglect to protect themselves against mosquito-borne diseases, even as they battle the COVID-19 pandemic.

During the last quarter of 2020, several CARPHA Member States reported localised outbreaks of Dengue, which placed an even greater burden on national health systems already engaged in managing the pandemic.

“Moving forward to 2021, we must all play our part in the prevention and control of mosquito-borne diseases in order to maintain our health and well-being, especially during the COVID-19 pandemic,” said CARPHA Executive Director, Dr Joy St John, in observance of Caribbean Mosquito Awareness Week 2021.

“The Aedes aegypti mosquito is a major vector, which spreads diseases such as Dengue, Chikungunya and Zika. These diseases can be a significant cause of illness and even death, impacting countries negatively on an economic and social level,” added Dr. Laura-Lee Boodram, Head of Vector-Borne Diseases at CARPHA.

“The introduction of Chikungunya and Zika in 2014 and 2016, respectively, into the Caribbean region, together with the presence of competent vectors such as Aedes aegypti, means that constant vigilance must be maintained.”

Caribbean Mosquito Awareness week (CMAW) was declared in November 2014 at the 17th Special Meeting of the Caribbean Community (CARICOM) Heads of Government on Public Health Threats. It is held annually in May and is an important reminder to the general public to take action to reduce their risk of diseases spread by mosquitoes.

The slogan for CMAW this year is: “Tiny…but DEADLY. Don’t wait…ERADICATE!”, placing emphasis on measures to control mosquito breeding.

CARPHA pointed out that as the rainy season approaches, water can accumulate in the base of plants pots, vases, buckets and used vehicles tyres, which are typical breeding sites, and an increase in vector populations will further the risk of disease transmission.

“The best way to ‘fight the bite’ around homes and communities is to ensure that our surroundings are clean and free of materials or containers that can accumulate water. Water storage drums and tanks should also be properly covered and inspected periodically to ensure that there is no breeding,” advised Rajesh Ragoo, Senior Technical Officer, Vector-Borne Diseases, at CARPHA.

“It is also important to minimize individual exposure to mosquito bites. Vulnerable groups such as infants, young children, older adults and women who are pregnant or trying to get pregnant are at greater risk. Personal protective measures including the wearing of long-sleeved clothing and the use of insect repellents are strongly recommended.”

CARPHA has recommended that greater efforts be placed on mosquito awareness in communities and vector control activities should be intensified.