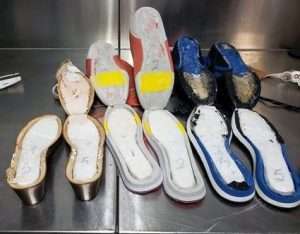 (JAMAICA OBSERVER) – US Customs and Border Protection (CBP) officers on Sunday found cocaine concealed in shoes inside the bags of a 21-year-old Georgia woman who arrived at Hartsfield- Jackson Atlanta International Airport on a flight from Jamaica.

The officers referred the woman for further inspection when she arrived and upon closer examination of her bags, found seven pairs of shoes with a white powdery substance concealed in the shoe bottoms that field tested positive for cocaine, said CBP.

The cocaine discovered was seized and weighed approximately three pounds, with a street value estimated at US$40,000. Atlanta CBP officers have turned the individual over to Clayton County Police Department for state prosecution.

CBP conducts operations at ports of entry throughout the United States, and regularly screens arriving international passengers and cargo for narcotics, weapons, and other restricted or prohibited products.

The agency said on a typical day, it seizes an average of 3,677 pounds of drugs.