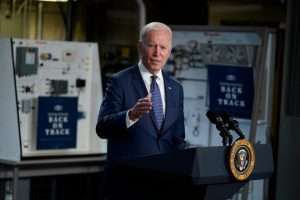 (CMC) — The New York Immigration Coalition (NYIC), says it has welcomed the decision by United States President Joseph Biden to increase the cap for refugee admissions from the Caribbean and other places.

On Monday, Biden reversed himself, saying that he would permit as many as 62,500 refugees to enter the US during the next six months.

“Today, President Biden listened to the American people, and took a bold step forward by keeping his promise to safeguard children and families fleeing violence and persecution,” Anu Joshi, NYIC’s Vice President of Policy, told the Caribbean Media Corporation (CMC). The NYIC is an umbrella policy and advocacy organisation for more than 200 immigration groups in New York State.

“With one fell swoop of his pen, the president took a step to end the divisive fear mongering of refugees fomented by the previous administration to further political arguments rooted in xenophobia,” he said.

“The Biden administration is now on its way to re-establishing America as a moral authority and continuing the country’s long legacy as a haven for those seeking refuge.”

In a White House proclamation, Biden said the number of refugee admissions authorised under section 207(b) of the Immigration and Nationality Act (8 U.S.C. 1157(b)) “sends the important message that the United States remains a safe harbour for some of the most vulnerable people in the world.

“Given the gravity of the global refugee crisis, the number of authorised refugee admissions must be ambitious enough to challenge the United States Government and its partners to build their capacity to serve more refugees,” Biden said.

“In my judgment, a refugee admissions determination of 62,500 reflects these values, is justified by grave humanitarian concerns, and is otherwise in the national interest of the United States,” he added.

US Secretary of State, Antony J Blinken, in a statement said that Biden “affirmed the United States’ commitment to humanitarian values by issuing an Emergency Presidential Determination on Refugee Admissions that raises the refugee admissions ceiling to 62,500 for Fiscal Year 2021″.

“Together with the April 16 Emergency Presidential Determination that made US resettlement available to more refugees from all regions of the world based on vulnerability, this Emergency Presidential Determination reflects the urgent, global nature of the refugee crisis and the part the United States will play by permitting more eligible refugees to be admitted to the United States,” he said.

NYIT said that for four years, “Trump’s single-minded and racist attacks on immigrants blinded him to both the social, cultural, and economic benefits of refugees and our humanitarian obligations to those seeking safety from violence and persecution.”

It said Biden’s announcement “marks the beginning of a long project to renew America’s moral standing and its reputation as a welcoming nation for all.”

The US President’s proposal is a stark departure from Trump’s policies, which drastically cut admissions from 110,000 in 2016 to 15,000 in the last fiscal year.

In the meantime, the Brooklyn, New York-based Haitian Women for Haitian Refugees’s Temporary Protected Status (TPS) Committee told CMC that it was collaborating with the Haitian National TPS Alliance in holding Biden to his promise of reversing Trump’s immigration policies.

“Joe Biden and Kamala Harris campaigned on a promise that, in the first 100 days of the Biden-Harris administration, they would reverse Trump’s discriminatory policies on immigration, including protecting TPS holders and DACA (Deferred Action for Childhood Arrivals) recipients, ending family separation and restoring asylum laws,” Ninaj Raoul, chair of the Haitian Women for Haitian Refugees.

“Now, we will go to Washington to fight for a permanent solution – permanent residency for all 400,000 TPS holders,” she told CMC.