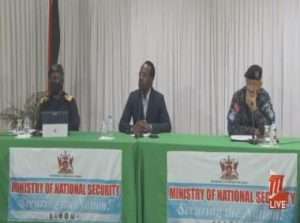 (CMC) — The Trinidad and Tobago government Sunday urged citizens to assist law enforcement agencies as the authorities deal with a wave of illegal migration and the entry of illegal guns and ammunition into the twin island republic.

“They have become the subject of the professionals’ interest,” Hinds said, noting that other illegal ports would also be patrolled.

He said there are “clear information that there are citizens of Trinidad and Tobago, some of whom complain loudly at the COVID-19 measures…involved and implicit in this,” Hinds warned, adding that “the same gun comes around and takes the lives of your cousin and sons…”.

Griffith told reporters that while he would not divulge the operations being undertaken by the several law enforcement agencies, including the recent discovery of arms and ammunition here, he could however confirm that “massive operation” is ongoing involving all aspects of national security in order to keep the country safe.

He said last year 513 illegal migrants were held and that 215 Venezuelans had been charged the previous year.

The national security officials said that a “massive operation” is being put together to deal with the south-western peninsular and Griffith said it is ironical that when many of the illegal migrants enter the country, person in the area are unable to capture even the name of the vessels bringing them into the country.

He said sarcastically that the batteries on their phones die on those occasions, saying that the police need the evidence of even rogue police officers involved in facilitating the trade.

The authorities said that those involved in criminal activities here should not be regarded as “Robin Hoods” adding “it is time for other persons to step up”.

“”I believe the police…intelligent agencies have some more capacity inside you….that all of you law enforcement (officers),…who are sworn and who are paid to conduct exercises in the safety of Trinidad and Tobago, you need to step up your game,….be like your leaders.

“The struggle is a very serious one…we are not aware of rogue elements in our ranks,” Hinds said, urging the law enforcement agencies to deal with those people “boldly and swiftly”.

Hinds said that the Office of the Attorney General is being asked to provide assistance especially through the Civil Asset Forfeiture legislation, warning those engaged in criminal activities that they will soon have to provide an account of how they accumulated their wealth.

Hinds also disclosed that since the official borders of the country have been closed as a result of the measures put in place to curb the spread of the coronavirus (COVID-19) up until Thursday last week, more than 35,000 people had been granted exemptions to leave or enter the island, adding “the system is working well”.