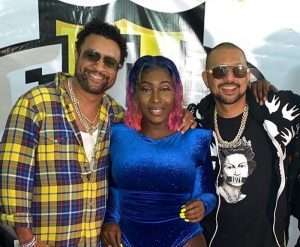 (URBAN ISLANDZ) – Spice new collaboration “Go Down Deh” debuts at the top of the US iTunes chart.

Spice, Shaggy, and Sean Paul, aka SSS, have been turning heads and waists with their new single “Go Down Deh,” and their US-based fans are making their love felt visa iTunes. Just two days after its release, the single already topped the USA Reggae iTunes chart and is currently at number 2 in Canada and the UK.

The track for “Go Down Deh” was released on Friday, and the video on The Queen of Dancehall’s YouTube page, BET Jams, and BET Soul a day later, this after days of promotion. Her recent success has not gone unnoticed by Spice, who thanked her fans in her own special way. The Love & Hip Hop: Atlanta star mounted herself atop the kitchen counter in her new home, where she performed a number of sultry maneuvers as she danced in celebration of her recent iTunes success.

“Go Down Deh is #1 on USA Reggae iTunes chart. Canada and UK get it to #1 if you want to see this full video, I seriously went on my head top for you,” she wrote in the caption.

The song was produced by Grammy Award nominee Costi Ionita and Shaggy and released via VP records. The entire production, from sound to visuals, celebrates the raw exotic culture of dancehall. The video, which was directed by Jay Will, was filmed in Kingston, Jamaica, featuring cameo appearances by other Jamaican Dancehall representatives, including Kemar Highcon, Walshy Fire, and Naomi Cowan. Director credits are also given to Kanye West, Major Lazer, Lee Scratch Perry, Shaggy, and M.I.A.

The collaboration with Sean Paul and Shaggy is what Spice, who has been through her fair share of ups and downs in the Dancehall, describes as “the biggest milestone” of her career.

“They are both International giants in our genre. I’m honored to have created such a historic moment by being one of the first artists to have them collaborate on a track together,” she said.

Spice is set to release a highly anticipated debut album on July 30, titled “TEN.” The details surrounding this album have not yet been announced.